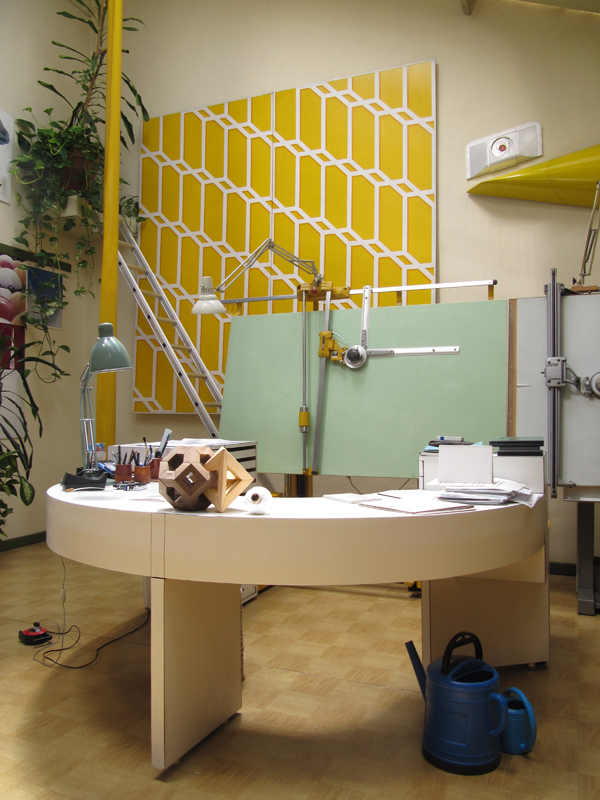 Q. In this issue of Quaderns we want to broach the subject of infrastructures at a time when a dysfunction has arisen between the time it takes to produce architecture and the time of its use. In recent years, airports have been built which now lack sufficient passengers. In this sense, we wanted to recover architectures capable of solving this dysfunction between the time of production and of consumption, as happened with the Instant City of 1971.

PP. The Instant City is an “inflastructure”!

If you are interested, I also have a design for a city of 3 million inhabitants. It is built at 48 metres above the ground, respecting what happens underneath it, the territory. It is demountable and has a weight of 50 kg/m², structure included!

Q. Nowadays the weight of buildings is being considered once more as a relevant factor… in the 1920s, in magazines such as ABC, there was a defence of lightness and essentiality …

PP. Yes, this is a subject that has always concerned me. In 1971 I took part in a competition to design schools for depopulated areas, for that reason they had to be reusable, so that when there were no more children, you could take the building elsewhere. All the façades were made of sheet metal, and the windows were the same as those installed in buses. Cold profiles were used and everything was screwed together to allow easy dismantling. It weighed practically nothing!

Q. When did you start working with inflatables?

PP. I started at architecture school in1954-55 approximately. I had already seen some ideas by Fuller… at that time I was interested with “less” things: less weight, less structure, less money… so the one idea I could work with was inflatable structures. Then I teamed up with an awning-maker, to start producing industrial units. I produced numerous designs for units. We did one for Astilleros Españoles in Cádiz which measured 33 metres wide by 180 metres long. I remember it folded up into just three packages of canvas measuring 2.5 x 2.5 x 2.5 metres.

Then I was invited to the MIT, at the time that Thomas Herzog was there, and he would later write one of the benchmark books on inflatables. While there I worked on projects of that type, including greenhouses.

Q. While in the United States did you have any contact with groups such as Ant Farm?

PP. No. When I started, the only pneumatic structures that existed were those by Walter Bird. Prior to that there was a patent for very heavy infrastructures made of tarred canvas. Later, during the Cold War, many radar antennas were built but, due to solar radiation, the antennas warped, losing reliability. So they decided to cover them, but Fuller’s domes were not suitable: the metal structure affected reception. Then Walter Bird invented a system using pneumatic structures.

I had seen some of those things… I started doing numbers.

Q. And how did the Instant City project begin?

PP. One day I received a letter from an “Ad Hoc Committee”. The group was formed by students. Fernando Bendito, Carlos Ferrater and others. I don’t know if it was really Luis Racionero who talked to the congress organisers, or it was the organisers who reached an agreement with him. But around that time, Luis was fascinated by his recent trip to the USA, where he had come into contact with underground movements on the West coast.

Q.  … and the idea of an instantaneous city?

PP. For some years I had had a certain idea in mind. When I was finishing my architecture degree, the tourism activity that later boomed was just beginning. Beaches, previously quiet and bare, had been gradually filled up with cheap, vulgar buildings built in great haste. Little by little, paradisiac and deserted spots had been transformed into masses of disordered buildings constructed willy-nilly. Far from improving, the situation worsened year after year. Degradation was added to degradation, denying the system time to regenerate.

Meditating on this situation and observing how dry-land farmers let the earth rest between harvests, or how lumberjacks plan the felling of the forest in such a way that it can recover, I wondered: would it be feasible to design a holiday complex that disappeared without a trace at the end of the tourist season, in a way that the next year it could be situated in a different, faraway place, and then return to its original site a year after that?

With all these prior conditioning factors, I had started to design a holiday complex whose buildings would not even need a structure. What better and cheaper construction material for such a purpose than air? That way we would not need to transport the most cumbersome and heaviest parts of our buildings.

These details, sparsely sketched in small drawings that depicted giant bubbles mixed in with pine groves and all kinds of nature on the beach’s edge, served as a basis for my proposal to the so-called Ad Hoc Committee.

Q. How could its construction be made viable on such a tight budget?

PP. My idea, following on from my prior experiences, was that we needed to pour all our efforts in a single direction, resolving everything with the same material.

Fernando and Carlos had contacted the Aiscondel plastics company, which at that time, just as ecology was starting to be discussed, saw the opportunity of enhancing plastic, raising it to the highest rank as “protective”.

We used the cheapest plastic on the market and I spent a month doing trials. As we couldn’t weld it, I invented a four-layered joint with a resistance just 15% less than that of a weld, but with the advantage that if you made a mistake, it wouldn’t be burned and you wouldn’t have to throw the piece away. The staples allowed for errors, they adjusted on their own.

PP. Well, when the meetings in Pamplona were held, I set up a spectacular contraption, with the largest possible size for the vaults. Being inside that was incredible!

Q. Now it’s in museums and is even interpreted as a work of art…

PP. It wasn’t produced as a work of art, but as a cheap and easy solution for accommodation…

Q. In contrast, in the case of Ponsatí…

PP. Ponsatí’s work is basically artistic, if there was any technical part it was responding to concerns that the installation would not break. In the Instant City there was no design, even in the colours… zero artistic intervention.

Q. In that project, the architect is simply someone who gives instructions so that the user ends up shaping the architecture.

PP. I am in favour of modular architecture: as an architect you simply provide a puzzle. I have various designs for dwellings under the motto “one house-one inhabitant”, using aircraft and boat technology. That kind of home can cost just 11,000 euros, like a car! But there needs to be a change in mindset, in the form of production, etc., and that is highly complicated.

Q. You are usually described as utopian yet in contrast, much of what you have been explaining responds to perfectly real problems… is changing people’s norms and behaviour more utopian than the projects in themselves?

PP. Yes, in spite of the price! I thought I was the normal one, but in the end I find the behaviour of the world very strange.

Q. The Instant was published in many magazines, such as Bocaccio, where several photos by Miserachs appeared.

PP. Those village women had donned their Sunday best to go and see the Instant. They stood in front of the entrance, looking at each other. As they had to adopt a certain posture to enter, they blushed, they made gestures, they looked at each other, laughed and then started to whirl around and around, and their skirts lifted up, like in a traditional dance. It was a beautiful sight. They did it in involuntarily. They got nervous and nothing else occurred to them than to start turning round and round, and the process was repeated again. Subconsciously they were aware that in that entrance to the Instant, there was something rather erotic and strange. It was an entrance which one had to squeeze through, so it was like a birth. By entering that way, people changed their attitude. Inside, they did things that outside they would never have dreamed of doing […].

One Response to “Interview with José Miguel de Prada Poole”