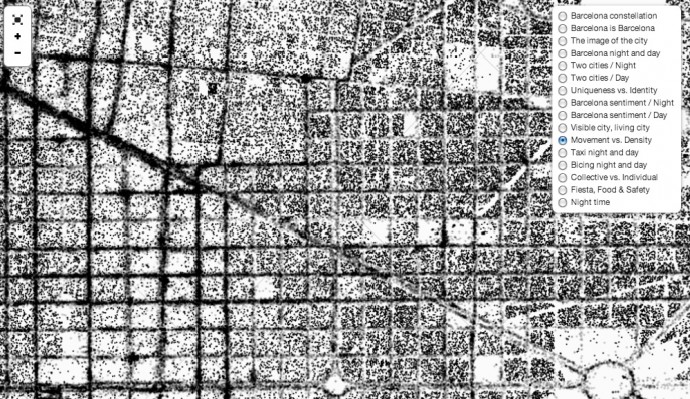 atNight is a research project lead by Mar Santamaria i Varas [principal researcher], Pablo Martínez Díez and Jordi Bari Corberó. It is based on the (re)definition of the term “nightscape”. We are all aware that the urban environment is changing really fast nowadays, as technologies, networks and infrastructures are improved often. That’s why the visualization of this phenomena becomes an important fact to understand the urban context we’re living in and to take it as a start point for future projects based on the relationship between citizens and the territory. Considering landscape in a broad sense, the research aims to build bridges between different technical and humanistic disciplines. The research team describes the project with these words:

“The research explores night urban landscape as a sensitive and cognitive relationship between people and their environment. The project focuses on the aesthetical process of identification of citizenship with their territory to emphasize the role of night in the definition of urban landscape –as the framework for leisure and socialization.

We believe that the opportunity to reformulate the basis of nightscape design involves the construction of a valid representation of itself. atNight aims to build interpretative cartographies of nightscape main assets in order to create a new critical model to share, discuss and develop ideas about nightscapes transformation.”

The access to data visualization allows a comprehensible way is useful to understand some issues that affects our cities as efficiency, transportation, and flows, among others.

The project is focused on the visual analysis of Barcelona, based on testing the potential of representation techniques of the city image by working on a night cartography. In this case, the aerial view reflects a world which is revealed in this extensive visual panorama of the city that has been drawn from the previous data assigning a sphere of influence to each point, is an organic interdependency between physical and visual structure of the city.

More info: atNight and we also recommend this article on MAS Context.