Architecture and/of the Other. PHANTOM. Mies as Rendered Society by Andrés Jaque 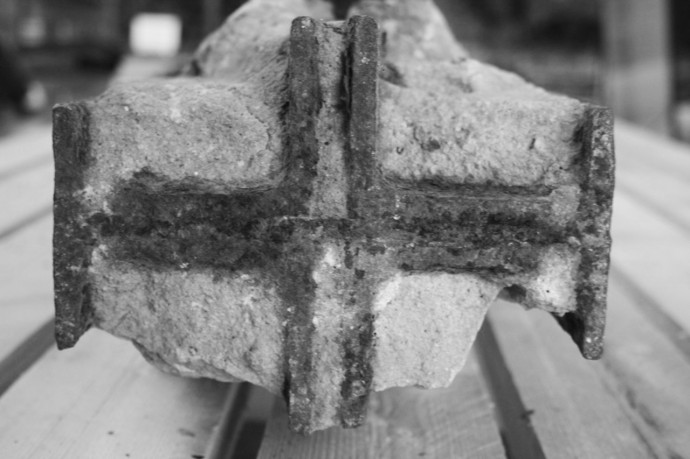 The exhibition PHANTOM. Mies as Rendered Society by Andrés Jaque at the Mies van der Rohe pavilion in Barcelona has just finished. It’s a good moment to reflect on its contents, its approach and the result. Nick Axel, architect currently based in Barcelona, has visited the exhibition and is sharing with us his thoughts about it. 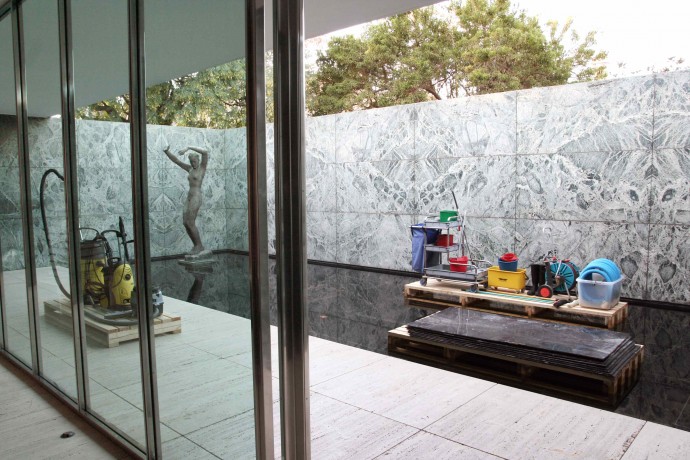 PHANTOM. Mies as Rendered Society by Andrés Jaque marks the fourth episode in a series of artistic and architectural interventions since 2008 in the Mies van der Rohe Barcelona Pavilion. Each intervention has spoken to the epistemological fixidity the Pavilion embodies as an Architectural canon, seeking to use its historical significance as a medium for another message.

This year’s edition confronts the pavilion as a model exemplar of the Modernist ideology as it is architecturally manifest in the distribution of objects and bodies in space. Similarly to Ai Weiwei’s critical position in 2010, Jaque concentrates his intervention on the disjunction between the image of the iconic building and the reality of what it takes to keep it recognizable as such.

Jaque brings to light the ‘support’ space by textually and spatially interrogating both its design intent and material reality. The concept of Free Plan, representative of the Modernists chief transcendental aim, epitomized in the Pavilion, is carefully analyzed in order to subvert its ideological foundation by obstructing its free-flowing spatial propensity. Marble-buffing machines, chemical cleaning products, broken tiles, ladders, dog bowls, worn out curtains and the like are tactfully placed throughout in such a way that the visitor cannot avoid confronting them, so as to face the aesthetic polarity and social binary inherent in the reified Modernist ideology itself.

The concept of transparency, as it was canonically embodied in the Pavilion, is wielded as a weapon and turned against itself by skillfully forcing its material transparency to reveal an ignorance of social transparency and radically undermine the affect of its historical space. Jaque makes the case that the Modernist ideology presupposes and is dependent upon an invisible Other. The argument conjecturally follows that Architecture’s aesthetic dimension does, and therefore must, extend beyond the surface to apprehend its full political operativity in (and for) the face of society. To quote, “the recognition and rearticulation of these two spheres can contribute new possibilities in which architecture finds answers to contemporary challenges.”

It could be further deduced that Jaque claims an inclusive design process can effectively abolish the ostracized Other, prompting investigation into the condition of this so-called post-spatialized Other. If spatial transparency is achieved, will the opaqueness of the Other, not necessarily in terms of social constructions such as class but in terms of immanent bodies in space, not still exist? Or would the condition of Other be universally distributed and internalized, subverting its spectacle-as-Other? Taking note from Jaque’s affinity to the philosophy of Bruno Latour, it could be safe to say his intention lies more in the latter, but it is difficult to ignore the former as a potential consequence of his representational techniques.

It is in the original design of the Pavilion we can find the locus of Jaque’s critique. Directly in front of the stairs at the top of the plinth, laying behind the monumental green butterflied travertine wall that passes the visitor into the central space is a translucent architectural volume. Notably, it’s surfaces are the only pure, uninterrupted, austere, and self-referential (for it is nothing else) ones in the entire Pavilion. This space, located in the center of the plan, conclusively presents itself as the Other to the rest of the modulated and ornamental space.

Encountered again when exiting the interior, this volume is easily perceived as a thin wall, emphasized by its material perception as glass, but a brief look at the floor plan reveals a substantial gap of space in between these two surfaces and exposes a revolutionary and absolutist interpretation of the Gothic concept of poche. Not structural, not functional, not accessible, not obvious and without any content whatsoever, yet significantly eluded to and undeniably felt, this enigmatic Architectural gesture evokes a fundamental opaqueness and unknowability to space and its contents.

In response to its apparent political failures [1], the concept of transparency has been neglected in contemporary discourse. At a point in history like today when a post-financialized architecture can be glimpsed, PHANTOM makes clear that the concept of transparency continues to play a crucial role in the active construction of a political society. Taking the intrinsic opacity as the foundation to make a claim for social equality, Jaque effectively demonstrates that we are prepared for what is to be done.