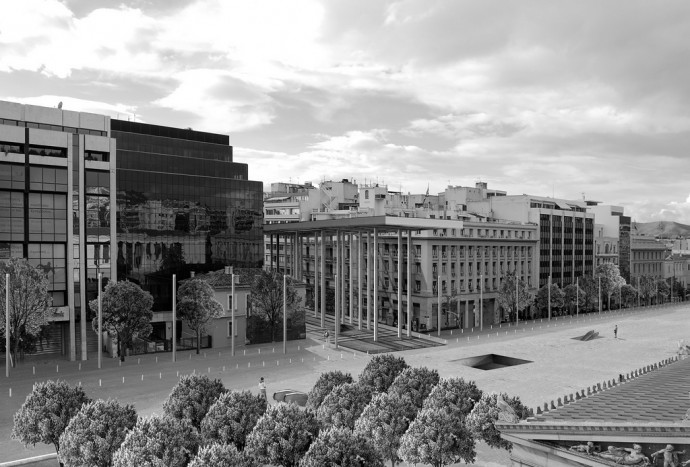 A few months ago the competition Rethink Athens presented their results, a selection of projects which envisioned ideas and objectives for the transformation of the center of Athens in 2016. The competition brief stated that the city will reclaim its public space and will evolve into a unique place, where citizens from every corner of Athens can meet, both in commercial and leisure activities.

Here we present the commended project Athenian Trench developed by Aristide Antonas, Katerina Koutsogianni and Platon Issaias. The Athenian Trench project can be understood as a new step after all these years that Antonas, Koutsogianni and Issaias have been researching the city of Athens, trying to understand its problems in order to propose “a radical change, related to a re-territorialization performed with new protocols; to see the city of Athens as a function of its perverse ground in the same time idealized for its ruins and undermined as the field of its infrastructure,” in Antonas words. The concepts of protocols and re-territorialization can be found in the basis of the project. 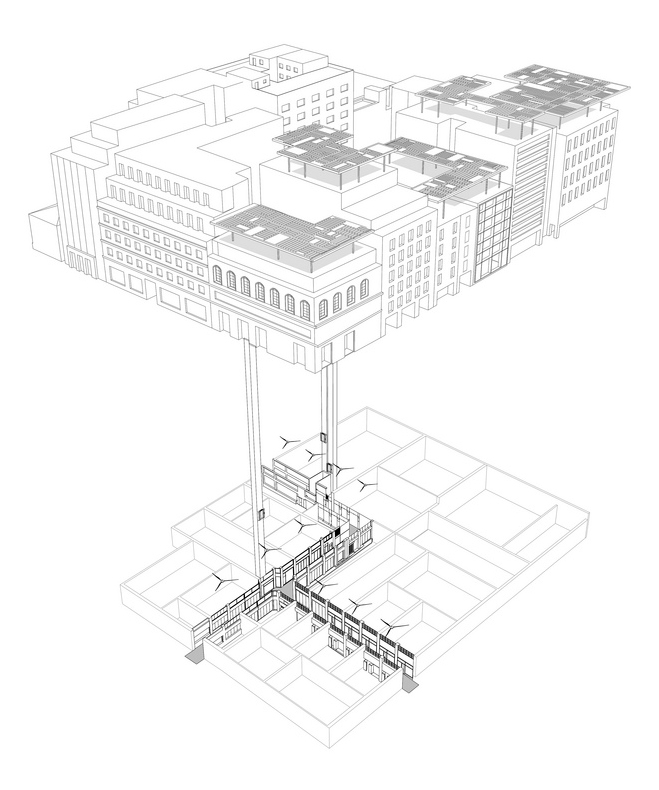 The following text was shared with us by Aristide Antonas:

“Athenian Trenches” tackle the city as a condition that operates with an apparent duality. On the one hand, what is stressed is the city’s current condition, which classifies Athens as the paradigmatic city in the era of this particular financial moment of the globe. On the other hand, the proposal measures the importance of the city as an urban formation inhabited by traces of both an ancient and a recent past. Every part of the Athenian history forms a potential narrative. The various successive layers in the city of Athens correspond to this system of narrative strata. Departing from Dimitris Pikionis’ tradition, but also commenting Bernard Tschumi’s interpretation of the urban underground in his New Acropolis Museum, we attempt to introduce a different type of “archaeology”, one that constitutes a spatial strategy documentation of the findings as project that leads towards some practices of urban subtraction that constitute the core of the project. The proposal uncovers, organizes, piles and composes in this particular moment the fragments of the city’s uninterrupted social activity. The “New Panepistimiou Axis” becomes the plane that continues the experience of Pikionis’ pedestrian networks of Acropolis and Philopappou Hills for the inhabitant and the visitor of Athens. The proposal introduces an area of transition from the ancient, historic spaces to the core of contemporary Athens.

In the landscape treatment of Acropolis and Philopappou Hills, Pikionis treated the paths and his new structures as planes of his idiosyncratic pattern: the archaeological findings and pieces constituted for him built matter par excellence, raw construction materials and not museological objects. The “Athenian Trenches” of the Panepistimiou Axis should be therefore understood as an attempt to transform the archaeological devices to a polemic, conceptual landscape narrative for Attica.” 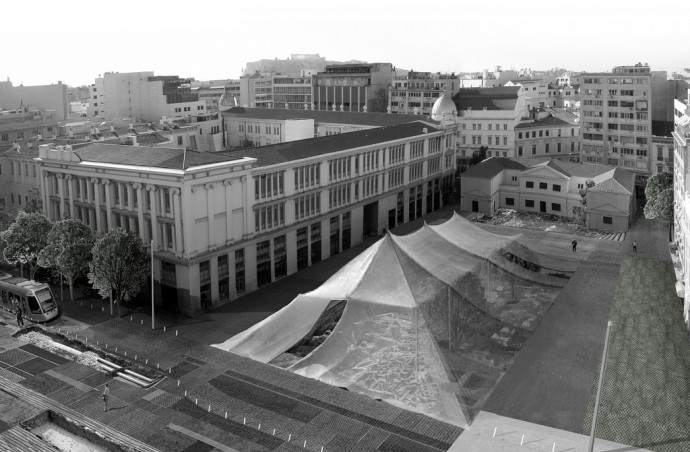 “In this proposal, there is an attempt to construct different qualities and occupations of public space, primarily with the removal of urban matter. We define as urban matter the material that organizes the surfaces of streets and squares, and also the building volume that occupies the surrounding area of the Panepistimiou Axis. Abandoned structures, degraded passages, empty commercial spaces and unexploited urban roofs are incorporated in the project, in an effort to regenerate and to economically boost these problematic clusters of the Historic Centre. In the street level, this “excavation strategy” materializes trenches and pits that uncover layers of the city’s historic phases. These peculiar archaeological digs display the more or less random ancient or medieval findings and ruins and together with these, there is a a field of infrastructural networks, recent building materials, tubes, pipes and rough structural planes that can constitute equally important materials of this paradoxical excavation. The arrangement of their fragments in the city’s public space, together with traditional archaeological findings, organizes sitting areas and spaces, underlying this peculiar composition of the Athenian ground. Within this perspective, the carvings of passages and the reactivation of the existing arcades, stoas and roofs constitute an urban initiative that similarly supervenes on the subtraction of building matter in a conceptual way. The porous quality of such operations do not only organize the pedestrian flows and the public activities but also signify a particular reading of the existing urban text.

Similarly with the archaeological excavation, which distorts the existing matter in order to render to the reality of the city a narrative of a different kind, “Athenian Trenches” demand to project a syntax of some sort, one being composed by the various uncategorized fragments, no matter where these are coming from. At the core of this Athenian practice lies a specific interpretive rigorousness, which converts the assemlage of impromptu findings to an effective, useful and coherent architectural field.” 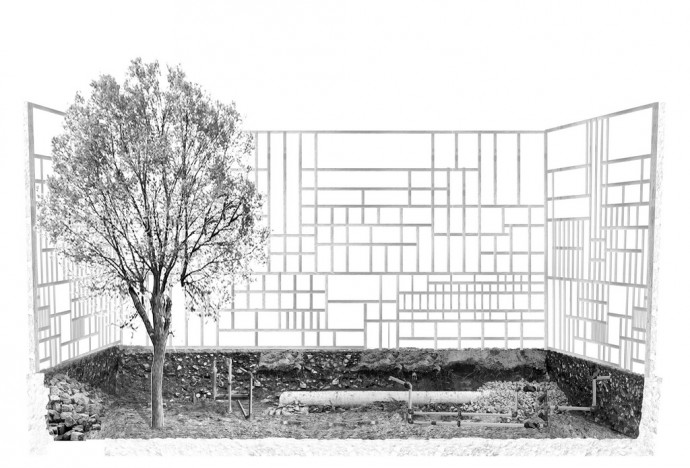 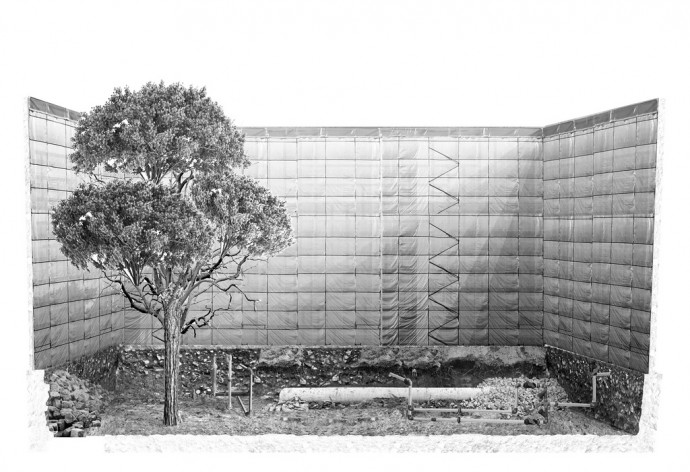 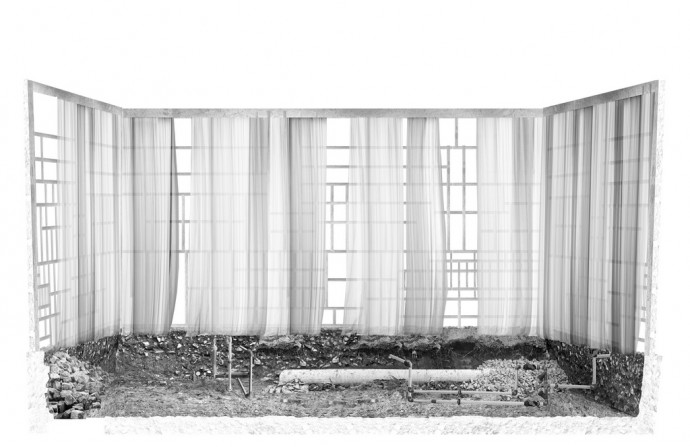 The City Protocols name some systematic micro-legislative interventions operated in the existing tissue of the city; the project proposes the administration of selected rooftops, arcades and specific urban areas such as Korai street with alternative legislations operating autonomously by a control via the Internet; the legal structure that would allow the protocols operation is the most crucial, invisible part of the project. Protocols would have to control the performativity of the proposed spaces in order to clarify political agendas in a practical manner; architecture is used towards an institutional intervention in the core of a collapsed city proposing structures that are supposed to spread socially and organizing new possible urban conditions that could last. The project orients towards an institutional cut viewing alternative city functions. The design departs from some observations on the very ingredients of the city’s materiality and history; the athenian ruins of any kind seek alternative protocols of habitation and programmatic activation. 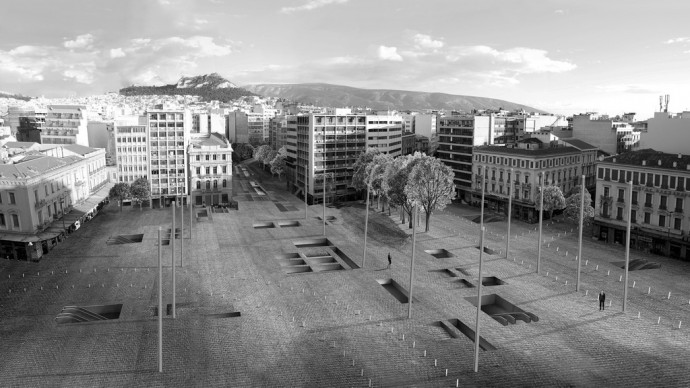 For a better understanding of the project, please see the following video [HD on recommended]:

Sequence 01 from Antonas Office on Vimeo.