‘Population of Fragments or the Warehouse Man.’ Aristide Antonas 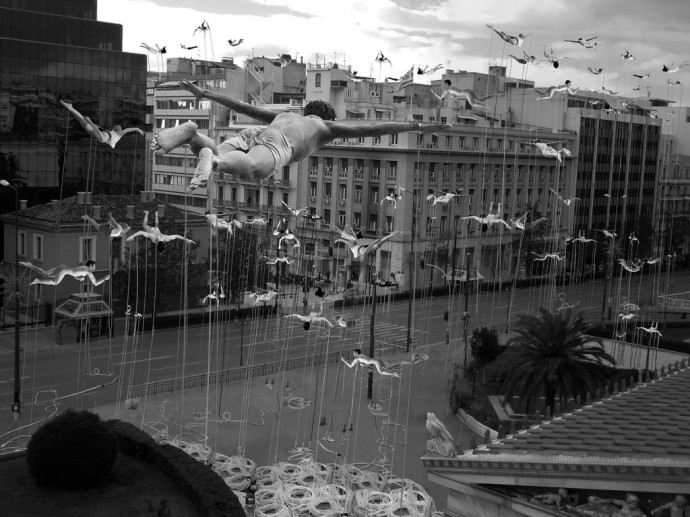 “The last man, man of the street, man of the crowd, man of the masses, mass-man; that’s how THEY represented Bloom to us at first: as the sad product of the time of the multitudes, as the catastrophic child of the industrial era and the end of all enchantments. But even there, no matter the name, there’s still that shiver; THEY shiver before the infinite mystery of ordinary man. Each of us feels a pure force growing behind the theater of our qualities, hiding out there; a pure force that we’re all supposed to ignore.”
—Tiqqun, Bloom Theory.

Greek architect Aristide Antonas has contributed to our last issue [Quaderns #265 'House and Contradiction'] with a visual of his project Population of Fragments or the Warehouse Man. This project and its accompanying series of images are a representation of a system of independent users that substitute a community, inspired somehow by Tyqqun’s Bloom Theory. While developing this project, some of the questions that emerged are: How can we transform this reality to a political condition? How can we think about the Internet as a conscious space for another type of legislations now that both the state and the market withdraw?

What follows are some fragments and thoughts by Aristide Antonas about this project: 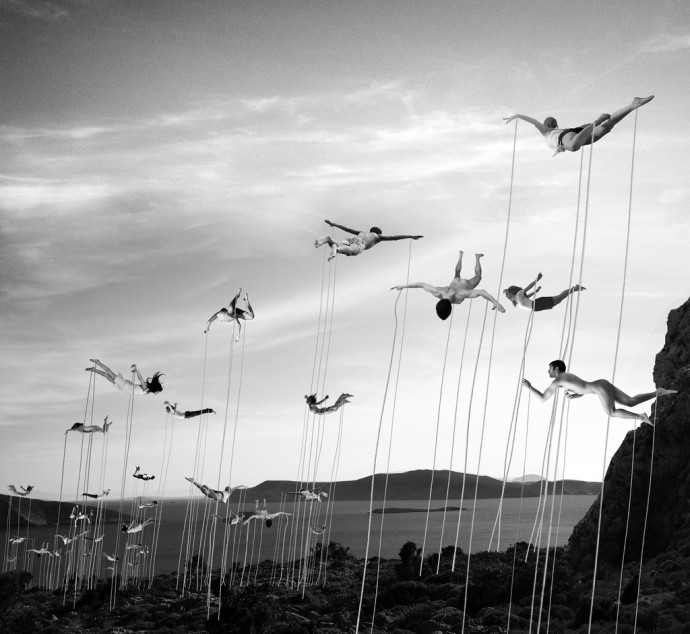 “I will be making a contrived description concerning the contemporary Internet Man. In this description of him, the Internet Man is organized as the hero of withdrawal. His place of reference is a warehouse. It is through here that my hero strolls, in his own special way. The description of the hero and the situation is not without a certain manufacturing practice of my own: I therefore name the character of the short narrative that follows: the Warehouse Man. The hero of the warehouse is interesting in that he is unable to structure himself. And yet this inability already characterizes him. He is conceived as a character precisely because of this inability; this inability is realized thanks to an organized system of shared, specific characteristics that are adopted by the Warehouse Man and which, at the same time, structure him as a character.

In terms of the Warehouse Man, there are three pairs of concepts that concern me. Through them I will describe the man and the situation: the hero lives in the peculiar, contemporary city. The first pair of concepts that concerns him is Material and Immaterial Homelessness. The second: Somnambulism and Insomnia. And, finally: Control panel and Warehouse [...] Even more so, as will become evident, the Warehouse Hero interprets the contemporary inhabitant of the Internet. The three pairs I introduced are intertwined. At the same moment the concepts are described (as if they make up a glossary or a small dictionary), I attempt to demonstrate their relationships. Material – Immaterial Homelessness, Somnambulism – Insomnia, Control Panel – Warehouse.”

“Before anything else” the Warehouse Man is manufactured by a disturbance of the condition of time and space. At once I ask myself: Can we imagine or can we already see the distortions of time and space which occur from contemporary man residing in the Internet? Does the technically described continuous on-line life have noteworthy consequences on the ethical aspect or the political experience of the society which will ensue? Or is the Warehouse Man nothing new but a mere transformation of an older character?

Regarding the pair of concepts mentioned above, Antonas started with Homelessness, that has taken on a transcendental power in contemporary thought. Focusing on this concept, he pointed that since 1920, in his Theory of the Novel, György Lukács uses the term “transcendental homelessness” to describe man’s urgent, impatient expectation to be “at home” wherever he may find himself. He adds:

“Homelessness was linked to a certain modern concept of “the power to reside anywhere”. Thus, contemporary homelessness is related to the detachment from specific familiar places, as well as to a certain abstract familiarity that is uninterested in the peculiarity of any place. Therefore, the Material – Immaterial Homelessness points to the specific chasm between the literalness and metaphor of homeless residency: between literalness and metaphor, we are asked to talk about homelessness in the modern-day city [...] Buildings, streets, sidewalks, plants, parks and lights were all systematically organized as the material equipment of cities. They were also organized – primarily – as abstract representations. The distribution of space is always at work in modern cities. The apartment actualizes the concept of the urban allotment. Even though it usually remains uninstituted, it describes the law of the urban cell: the right to housing may or may not be constitutionally guaranteed but, in any case, the cell of the apartment embodies the abstract right of participating in a certain apportionment. The inhabitant of the city resides in the apartment. The apartment, as an urban cell which proceeds to multiply (as it finds its place in the urban fabric), builds the city: the city thus emerges as a system for the distribution of housing or as a peculiar archival machine.” 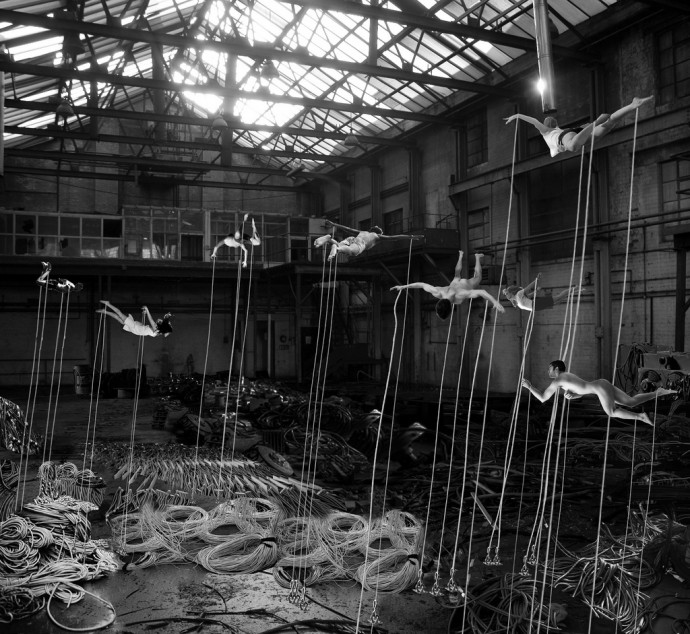 “Two human characters of the city abstain today from possessing an apartment. For different reasons and in radically different ways, two heroes in the contemporary metropolis make us wonder, immediately after we announce them, whether they belong to what we have, hitherto, termed the “city” [...] Their profile is defined by global characteristics: they are not the protagonists of a local play. The inhabitant of the Internet and the city’s Homeless Person are certainly both homeless. The former is living the metaphorical experience of transcendental homelessness, while the latter has been thrown into the literalness of homelessness on the stage of the city. The metaphor of homelessness is experienced as the condition of an infinite interface.

The hero of the warehouse, on whom I have been focusing from the outset, is an inhabitant of the Internet and an important figure of communal life to whom we refer when we think about the immaterial aspect of homelessness. The place of homelessness (immaterial and tortuously material) will direct every urban compilation of future societies. The difficulty of the homeless person to find a place defines the fact that yesterday’s city will not resemble tomorrow’s. The city no longer seeks simple positions for its homes, but different institutions of homelessness. Moreover: the increase in the number of possible positions for the Warehouse Man does not illustrate only Lukács’s argument for easy nomadic residency, but also the particular inability to reside in a world which is made up as a “population of fragments”. Communities that already form (in an invisible way) the contemporary city are composed of inhabitants of the Internet.

Accumulation transforms the resident of the Internet into a particular Warehouse Man. At the same time, faced with the voraciousness for stored things, the Warehouse Hero shapes the particular warehouse in which he lives.”

“Anything can be a thing of the Warehouse as long as it is already represented or is declared representable. We claim that in the Warehouse what takes place is not merely the consolidation of objects that were outside it through their classification and representation. The Warehouse contains only representations of objects, without the need to ever present the “objects themselves” [...] The search in the Warehouse is already a compilation of incongruous answers, it does not open the path to an open, unanswered question: it does not show the possible construction of a world organized by the inability to organize.

The collection of answers which each user receives in the Warehouse will become increasingly difficult to be explored at once as a whole: each answer separately inaugurates other questions and new manifold, fragmentary levels of answers.”

/// The Bloom’s Room, the Island Interface and the City Interface are images prepared at the Antonas office by Aristide Antonas and Katerina Koutsogianni.
/// Population of Fragments or the Warehouse Man is an essay by Aristide Antonas, translated by Mary Kitroef. The complete essay will be published soon both in Greek and English. More info: Antonas web-site.

One Response to “‘Population of Fragments or the Warehouse Man.’ Aristide Antonas”