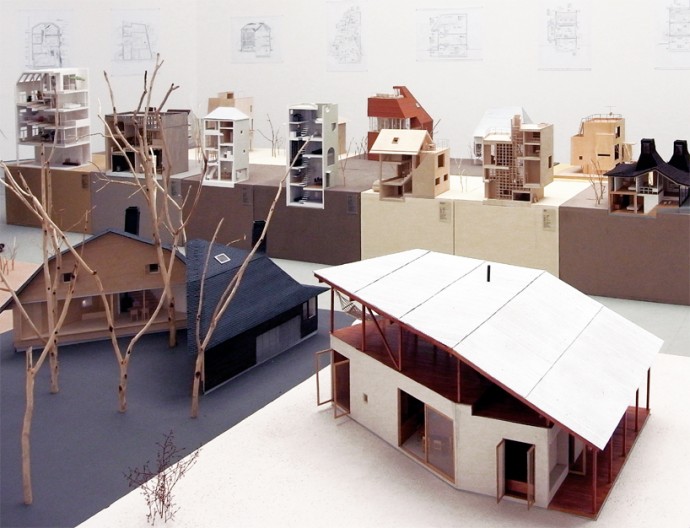 Atelier Bow-Wow, founded by Yoshiharu Tsukamoto and Momoyo Kaijima in 1992, is well known for the development of housing projects and its special interest in the domestic scale. Its housing projects are diverse, ranging from Split Machiya, a small house of only 27 sq m, to social housing blocks. We started this interview with an image on the table of Kenji Ekuans’s Metabolist project, which opens this section. In this conversation, Yoshiharu Tsukamoto summarizes his design philosophy, and the importance of housing in the Japanese context, through some
of the concepts he has developed during his research, such as Void Metabolism, a horizontal re-reading of Metabolism based on the existing voids in the urban fabric and Pet Architectures: microarchitectures occupying these urban interstices and gaps.

Quaderns: In this issue we focus on the notion of domesticity, both from a political point of view and from the generation of domestic architecture by means of its smallest unit, the room, i.e. two radically opposite but at the same time converging scales. In this sense, and since this section is dedicated to revisiting images or texts published in former issues of this journal, we would like to select a project by Kenji Ekuan. As a matter of fact, Ekuan’s work as an industrial designer has ranged from the small scale of objects to the big scale of the city during its Metabolist period, a period that, after the crisis of WWII, was left facing some uncertainties about the immediate future. In your own practice you have constantly referred to the concept of Metabolism and its architecture. What is your position towards this movement and its implications more than five decades later?

Yoshiharu Tsukamoto: Metabolism was a fast movement that tried to conceptualize the nature of the city and of Japanese forms of construction; therefore it has been very important for the modern architectural history of Japan.

Metabolism emerged in the 1960s, in the midst of major economic growth where people were seeking a promising future. Metabolist architects believed that for this to happen, it had to be by means of a concentration of power and capital. This is clearly shown in the model of Metabolism buildings, which were formalized by means of a core around which capsules could be placed and, therefore, buildings could supposedly be easily adapted to changes affecting society. These kinds of infrastructures could only be tackled with the support of powerful public initiatives. But instead, what really happened after the 1960s, is that the surface of the city was occupied by very tiny, two- or three-story high houses promoted by individual initiatives. The Government didn’t have sufficient budget to reconstruct the whole city using public money, so instead incentives were given to people to allow them to build their own houses, thus promoting individual private investments. Many people were given 20- to 30-year mortgages to build their home. That turned out to be a very powerful driving force for the reconstruction of Japanese society after WWII.

Therefore, the reconstruction of the city was not achieved through a concentration of capital and power, as Metabolist architects would believe, but instead, it was achieved by the dispersed nature of capital and power. Today, the city of Tokyo has more than 10 million inhabitants and the properties are owned by 1.8 million owners, so that can give some idea of how the city is highly subdivided into small individual ownerships.

Q: You have referred to the term Metabolism with some kind of irony when you defined Void Metabolism, could you explain to us how you relate the two?

YT: We keep on continually regenerating buildings in our cities. The average lifespan of a house is thirty years, so there is constant replacement of buildings going on. We could call that Metabolism, but in a very different way to how Metabolism was addressed in the 1960s. Not referring to a core and capsules, but instead to a void and a grain. I started to call this type of Metabolism based on empty spaces, that is happening today, Void Metabolism. 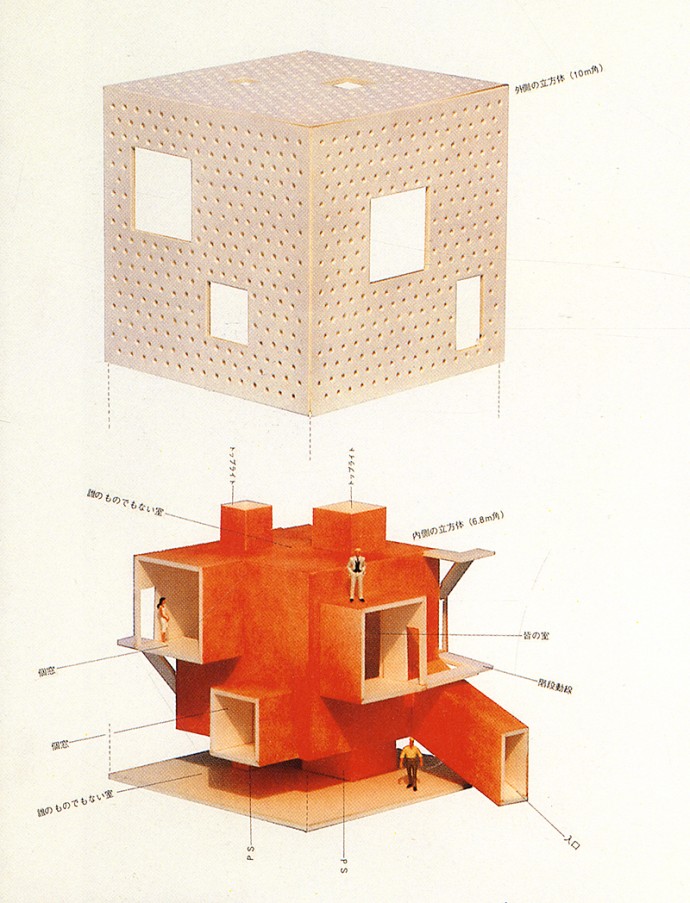 Q: In a way, this notion of Pet architectures that you have defined and that refers to all these tiny buildings developed in leftover plots in Tokyo, takes this idea to the extreme and can be understood as the antithesis of those big systematic Metabolist projects, though in both the idea of the micro-unit remains…

YT: Pet architectures could be seen as a counter-hegemonic project to the megastructures of Metabolist buildings, but there is a big time gap between the two. I studied Pet architectures thirty years later, so in this sense it is not strictly a counter project. Pet architecture is instead a counter project to formalism. I am very interested in building as a state of practice rather than in the application of a form to the overwhelmed conditions of a context or to the real nature of a place. I really like to see how buildings emerge from the ground, from people, from everyday life, from some corners of the city, which seem to be produced almost by accident. This kind of building clearly shows the state of our practice and how it can go far beyond the value of beauty or ugliness.

Q: This manner of understanding our profession can be related to the concept of the practice of space, i.e. to the way we use space in relationship with everyday life. In this sense, how is your work related to this idea of everyday life, and how is this concept specifically worked out in your houses?

YT: I am always trying to work closely with clients. Our action through design consists of providing them with a recognizable framework, capable of drawing together their entire life experience up to that point. We try to get as close as possible to our clients in order to understand why they want to build a house here and now, what makes them desire a house. Our architectural designs always try to find the best framework to clarify these reasons and also to encourage them to continue practicing themselves, in order to complete their house and make their own life through spaces. So this is my own idea of the practice of space.

Q: Most of your houses don’t have perfectly closed rooms but instead they appear as interconnected spaces. It seems that there’s always this need to build up a dialogue between domestic corners.

YT: My clients usually are not rich so this way of working comes from budget limitations and from the available surface of the site. In order to establish as relational a space as possible, we try to work with the different behaviors of the house: the direction of human bodies, furniture and windows always imply certain behaviors. We utilized these kind of criteria while working out the exterior enclosure, which allows continuous relationships to be created between different behaviors inside the house, so, ultimately there’s no need for strong partitions, different activities can happen in the same continuous interior space.

Q: Going back to a bigger scale, in Japan there are regulations that define urban spaces in residential areas that are difficult to find in our context. For instance your house-atelier is built in the middle of an interior courtyard and it has only one connection to the street through a two-meter-wide passage. Those leftovers are, somehow, domestic spaces as well.

YT: Yes, those spaces are in between domestic and public space. Unfortunately in most cases they are enclosed. In the old days they used green hedges to do it, so they were softer, but nowadays they use concrete or steel fences. They have become more and more ungenerous. I always try to avoid having fences in property lines. Our houses are always built in the city without any enclosure. The treatment of these leftover spaces has so much potential! They can be totally privatized but, in a limited site, if you enclose it you cannot use it, so it just becomes a dead space. It is better to open it, there is a certain sensitivity behind not stepping into this kind of private space. This tension is quite interesting in residential areas.

Q: How do you address public space from the domestic space?

YT: We always plant trees to make it pleasant to walk in front of it… But on a larger scale, Japanese urban space is really different from its European counterpart. We don’t have squares with a church and a town hall enclosing an open space where everybody can gather. European public space is very well constructed and represented. In the case of Japan, the public space is more related to the time and all that accompanies the season, the best example is the time when cherry trees blossom at the end of March or beginning of April. When cherries blossom, people go out to enjoy the new spring season.

People like to go there to admire the cherries, of course, but they also enjoy the synchrony of this gathering of many different people, in the same place and at the same time. In Japan, public space is more related to this synchrony, to the existence of an event happening in the city, or provided by nature or related to religious rituals. People enjoy the public space more according to this sensitivity regarding time. And this is very different from what happens in European culture. Our public space is less programmed and less settled. We just bring blankets and drink sake, sing and talk with neighbors. It is a very joyful moment for any Japanese person. You lose the boundaries of your self and melt into the crowd.