Transformation of Cape Town’s Informal Settlements: “The Pressure Cooker on the Boil” 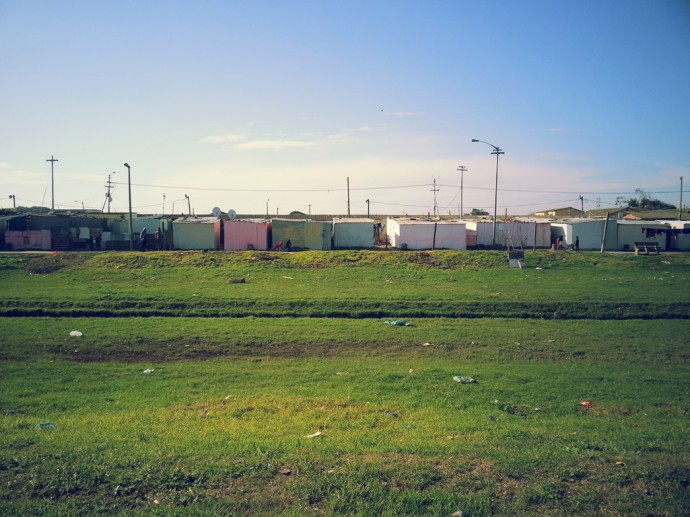 The apartheid regime in South Africa maintained its rule through the ‘organization of urban space into racially segregated living areas’ [1]. Since the regime’s fall [1990], the easing of migration rules to cities have lead to the rapid growth of informal settlements in South Africa’s major cities: In 2010, the total population of informal settlements was 9 times more than in 1994 [2]. Whether the migration to cities and the resulting land occupations in post-apartheid era actually undermined the apartheid city or emphasized it, is one major question: Poverty among the ethnically segregated, and the shift towards neoliberal policies combined with the lack of infrastructure make cities inaccessible to a considerable part of its citizens.

Lotus Park is one of the informal settlements of Cape Town. Almost 1/5th of Cape Town is composed of informal settlements and these are not on the outskirts of the city, but right at the heart of it. Mandela’s admirable restructuring and development program has hardly helped their upgrading, for the reason that the program is top down, formalized and subsidize housing as product, i.e. ignorant to [incremental] processes. Greater transformation projects in country and city scale, like the Cities without Slums [3] and the N2 Gateway project seem to favor capital accumulation but not the inhabitants of the informal settlements. Displacement attempts and protests are regularly on the news. One inhabitant who took us around Lotus Park resembled urban renewal in South Africa to the pressure cooker on the boil. [How] do you do urban upgrading or renewal in such a context? 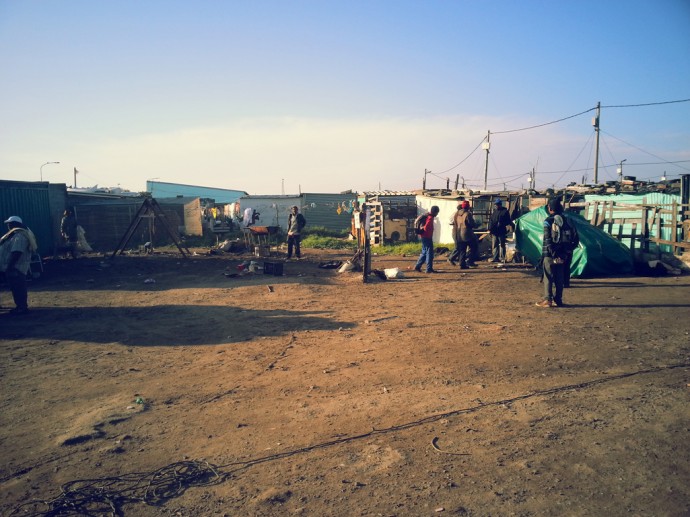 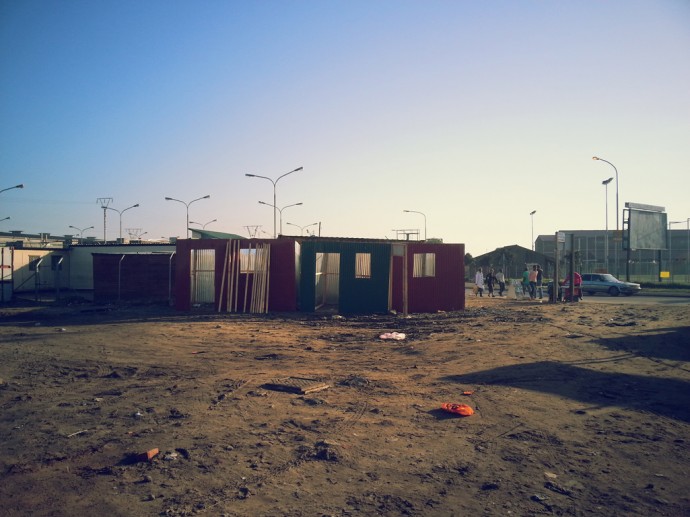 Mbembe says the most social struggle of these times in South Africa can be read as the attempt towards the right to be urban [4]. In a city like Cape Town, where many are possibly ‘citizens without a city’ [5], the right to the city and the freedom of organizing collective capacities need to go hand in hand towards an open city and society.

Richard Sennett talks about the two main spatial elements of democracy in his reading of ancient Athens [6], Pnyx and Agora: “… the agora consisted of a large open space crossed diagonally by the main street of Athens; at the sides of which were temples and Stoa[s], shed[s] that opened sideways onto the agora… Perhaps the most interesting feature of the stoa and the agora was the transition space just under the shelter of the stoa… What import did the complex, teeming space of the agora have on the practice of democracy?” The agora was the place in the city for the tolerance of difference, diversity: “If the same persons or activities are merely concentrated but remain isolated and segregated, diversity loses its force. To count, differences must interact.” The Athenian agora made different citizens interact in two ways, the second, being the important one in our context: “…the agora established a space for stepping back from such engagement – at the edge, under the roof of the stoa; was a fluid, liminal zone between private and public. This edge was where change would start.” 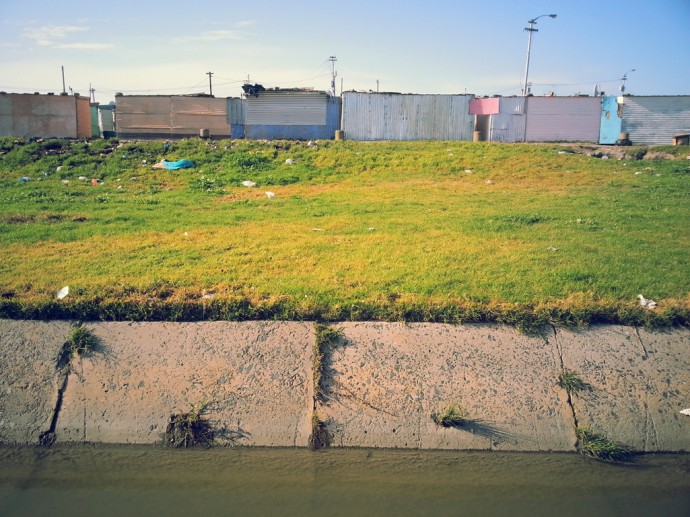 Edge condition 3: The river, terraces and the neighbouring houses 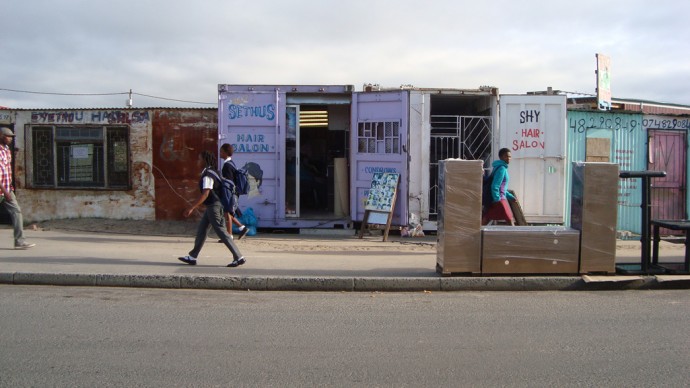 The edge, the stoa is what we are interested in the context of Lotus Park, Cape Town: Touching the neighbourhood on its edge, creating spaces for interaction with the city and the surrounding neighbourhoods, creating potential spaces of diversity at these edges, and expecting this to cause an impact in Lotus Park and Cape Town in the long run. An attempt of transforming the edges of the neighbourhood is also an attempt towards breaking the apartheid’s invisible borders and isolation. In Lotus Park, we propose to realize this transformation through creating collective economical capacity. Many informal settlements also suffer from unemployment, in our case half of the inhabitants of Lotus Park don’t have a job. Organizing the spaces collective economical capacity at the edges of the neighbourhood could increase the sense of ownership/belonging to the neighbourhood, while solving a practical, yet crucial problem of unemployment.

The second wave of post-apartheid urbanization will reshape the nature of cities in South Africa, which will most probably be characterized by the informal settlements and ‘urbanization of poverty’, a mutually reinforcing process, as the place of poverty moves from rural to urban areas6. In our opinion, initiating change at edges by creating spaces of diversity and organizing collective capacities have the potential of translating into an alternative, not only for the informal settlements but the post-apartheid city.

[1] Robinson, J. [1996] The Power of Apartheid: State, Power and Space in South African Cities. Oxford: Butterworth-Heinemann
[2] UN-Habitat [2010] State of the World’s Cities 2010/2011: Bridging the Urban Divide. Nairobi
[3] The “Cities Without Slums” action plan was developed by the Cities Alliance in July 1999 and launched by Nelson Mandela at the inaugural meeting of the Cities Alliance in Berlin in December 1999: www.citiesalliance.org/cws-action-plan
[4] Mbembe, A. Nuttall, S. [2004] Writing the World from an African Metropolis. Public Culture, 16 [3], 347-372
[5] Appadurai, A. [2002] Deep Democracy: Urban Governmentality and the Horizion of Politics. Public Culture, 14 [1] 21-47.
[6] Richard Sennett describes the details of the spatial prominence of stoa in his article, Democracy and Its Spaces. There, he explains the details of contemporary design projects, which work with the principles of stoa’s transformative spatiality at its edge.

/// Land+Civilization Compositions is involved in the ongoing Density Syndicate project by African Center for Cities and International New Town Institute. This contribution would not have been possible without their invitation. We would also like to thank VPUU, South African NGO for informal settlements.