What is Interior Urbanism? 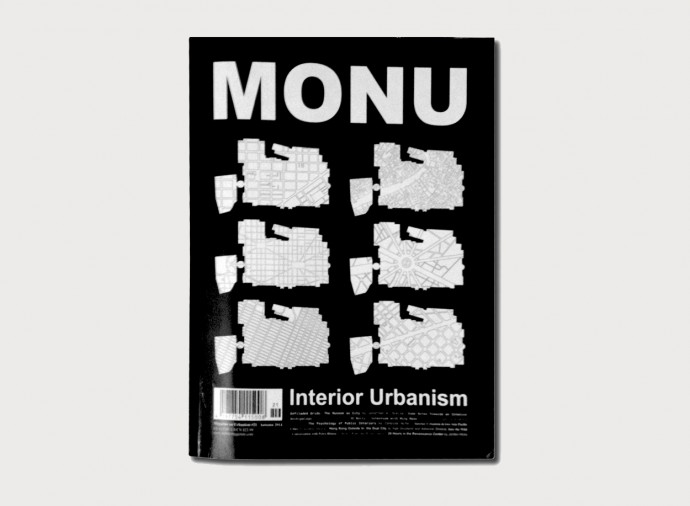 In 1969 Reyner Banham in his book The Architecture of the Well-tempered Environment marked the shift between the concept of interior to that of an artificial environment. Technology and new human needs in fact had become an integral part of architecture, defining a new paradigm to describe indoor space, that it was not any longer a concern of the singular living-cell but rather of its internal atmosphere.

The issue 21 of MONU describes the current development and the extreme consequences of what this Interior Urbanism means. As Brendan Cormier emphasizes in his article Some Notes Towards an Interior Archipelago: “90% of our lives are spent inside. Urban life is an interior affair.” This statement manifests the necessity to invert the canonical approach to read and plan cities, unfolding a new possible stream of research which considers how architecture affects our everyday life.

Climate, or the need to erase the atmospheric conditions, is one of the trigger factors of the production of interior urbanism. Michael Piper & James Khamsi in Endless Architecture: Accidental Manifestos for the interior state that “the interior has grown to become an endless type of urban form” which provides an indoor urbanism between the malls of Toronto producing a protected shelter against a hostile climate. The system grew until the inclusion of the public buildings such as the station and the city hall overpassing the threshold of the commercial status of this air-conditioned environment. 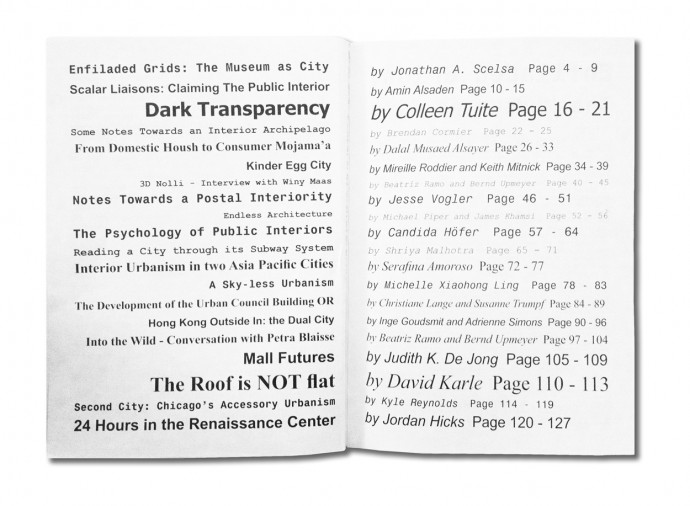 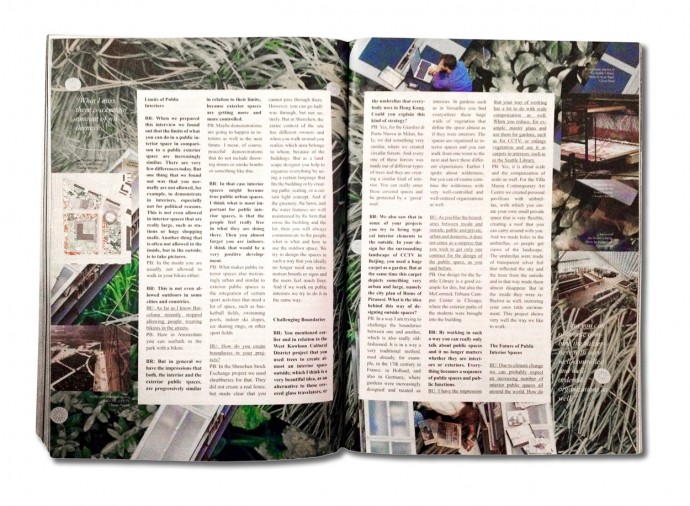 As described in the essay of Inge Goudsmit and Adrienne Simons, maybe the most extreme scenario of indoor urbanism is the case of Hong Kong, where for specific contextual constraints such as the tropical climate and the lack of space, not only the city developed vertically but also the public space defined a network of inner connections where common life develops. Assuming as cases, the extremes of Canada and tropical China, it seems that the necessity for a hospitable public environment, despite the climate, is nowadays an unavoidable condition for the contemporary cities. This need for well tempered buildings represents an important factor for the homogenization of architecture worldwide, even stronger than the cultural one.

Nevertheless the quality of this kind of space manifests the always present antithesis between public indoor life and social control. The fact that the interior pathways of Hong Kong became the place of constrained and channeled commercial episodes with no choice for the citizens is described as one of the risks of interior urbanism by Petra Blaisse in her critical claim for wilderness in urban spaces as pointed out in her interview Into the Wild. Both interior and exterior public spaces are assuming in fact the same connotations challenging their conventional opposite characters: if public buildings are assuming the spatial organization of interior landscapes, the exteriors are being ruled more and more in terms of use, as if they were buildings. 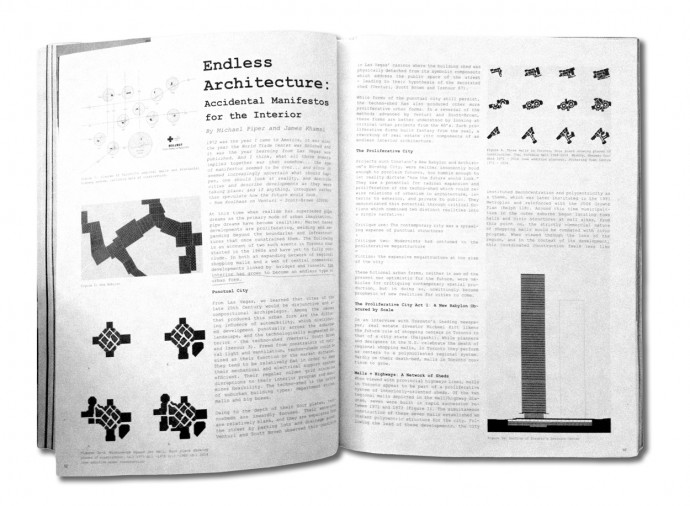 If it is true that certain internal conditions are able to create new urban spaces (as in the cases described above) the opposite is also true, that some buildings have assumed a character of indoor urbanity. One example is the article by Jonathan A. Scelsa Enfiladed Grids, The Museum as City, which highlights how museums are taking the configuration and the spatial experience of a city through the wise use of the intermezzo or the connective space between exhibition rooms such as in the work of OMA, REX, Jean Nouvel and SANAA.

This condition of blurring between interior and exterior is well described in the interview of Winy Maas, where the metaphor of a “3D Nolli”, in relation to the Nolli Map (1784) which first represented the enclosed publicly built surface as part of a continuum with the open spaces of Rome, is used as a tool to interpret a new generation of indoor public spaces like the Market Hall in Rotterdam. Scale and urban density, in the words of Winy Maas, are the “activators” of this kind of internal condition where the boundary between interior and exterior is totally blurred. 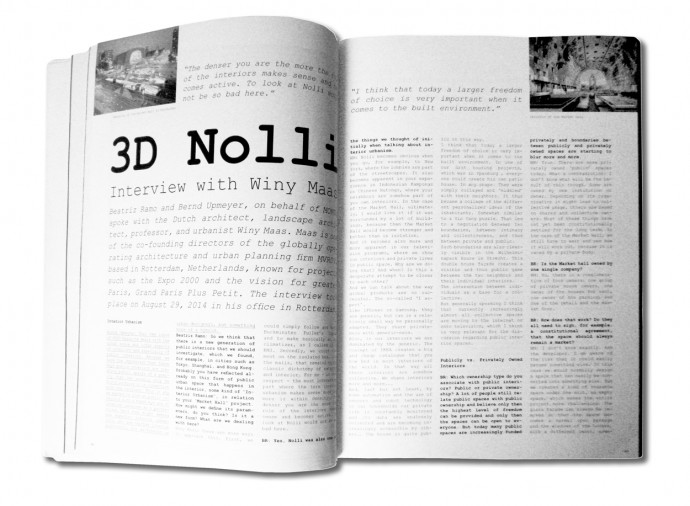 Reversing the traditional figure/ground opposition defined by Nolli Map, the poché which represents the private buildings unfold another, less porous, dimension of interior urbanism. In Some Notes Towards an Interior Archipelago, Brendan Cormier describes as an urban paradigm, the network of places that hosts the daily life of human beings. Far from the radical scenarios described by Archizoom in the No-stop City, our everyday life is not the one of the free man in an open indoor environment but rather it is confronted with the problems of ownership, differentiation and exclusivity, that define the gradient of permeability of this continuous interior. Visible and invisible boundaries restrict the possibility of wandering. In a moment in which, through the social networks, our lives have become public in almost every aspect, the interior has become the eminent space of privacy and thus intimacy and freedom.

In our opinion this different approach, so widely explored in MONU 21 in all its different aspects, represents a useful tool to overpass the dichotomy between the city as a system and the building as an object. If in fact we assume that there is a unifying field that relates to all the objects which compose the city, the urban dimension is no longer a matter of juxtaposition.  With MONU 20 about Geographical Urbanism, this issue challenges the scale through which we are used to reading/to interpreting the city: from XS to XXL questions, there is a need to understand urban phenomena defining the new extents for urban life.

— Claudia Mainardi and Giacomo Ardesio. Both of them graduated in Architecture at the Milan Politecnico, they are both part of the collective Fosbury Architecture and they are currently working at OMA in Rotterdam.