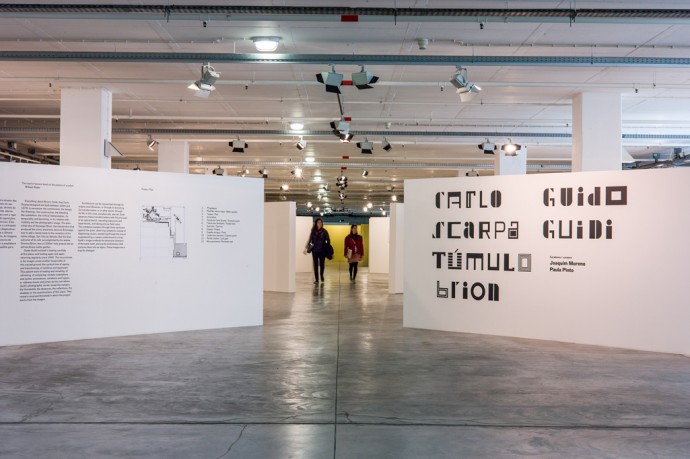 It is amidst a 7-meter-span square grid of concrete columns in a former parking lot that Joaquim Moreno and Paula Pinto curated Guido Guidi’s relentless 20-year effort to learn from Carlo Scarpa’s Brion’s Tomb, at San Vito de Altivole, designed and built between 1969 and 1978. The exhibition is devoted to a cascade of visions: 240-plus images of the tomb, produced by the photographer between 1994 and 2007. They form the multiple layers of knowledge – between the place, the architect, the construction workers, the photographer, and the curators – that confront the viewer with complex moments of architectural perception.

Everything spins around Guidi’s 20 by 25cm, full-scale contact prints: the camera was the media of Guidi’s research on Scarpa’s architecture, as the prints are the media that engages the viewer. Being full-scale contact prints the images have colors and details unfamiliar to our contemporary eyes: there is a physical translation – or traveling – of the light at San Vito de Altivole, to its reflection in Brion’s Tomb’s materials, to the negative film on the photographer’s camera, to its direct imprint in the photosensitive paper, and to the eyes of the viewer. Nothing is immediate, and we can learn about these slow travels in Guidi’s text at the end of the exhibition. The words tell how he learned to “see” through the camera, to grasp the physical movement of light between materials, presenting a self-evident reality inexistent before his observation through the lens. This observation affected him, the shade moving through the building, creating forms reminiscent of Klee’s formal theories and abstract compositions, transporting Scarpa’s obsessions towards Guidi’s own. Often visiting the cemetery to see the building under specific light, he was frequently betrayed by the weather, and was thus forced to discover new aspects and produce unexpected images. He mused: “I would have liked to stop the sun every now and then—don’t move!—so that I could run around and record the effects of the same light on the other areas of the cemetery.” 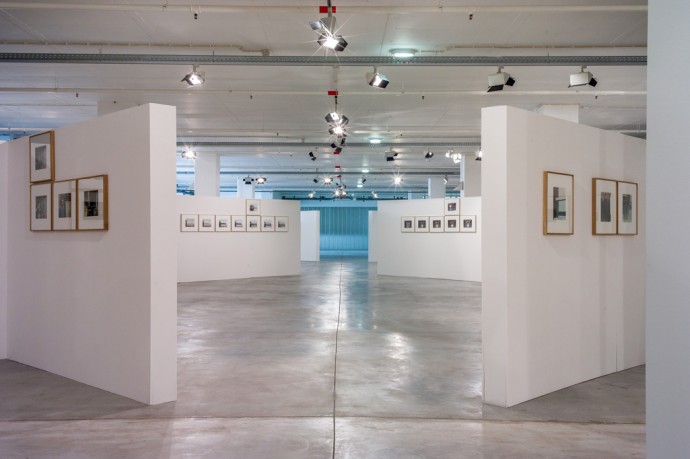 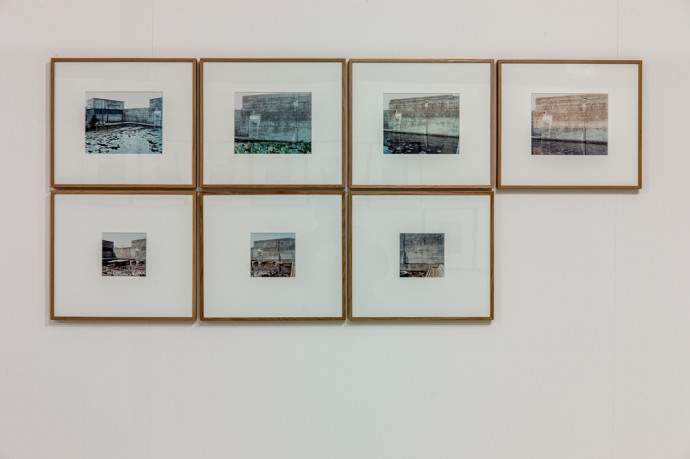 Guidi’s photography allowed him to avoid the traps set up by Scarpa’s own obsession with architectural detail and form; the images are not descriptive, but are inquisitive. It is as if architect and photographer were in dialogue. Neither of them had to dismiss their own ideas about architecture or photography, and the images return the fruits of a respectful conversation.

The exhibition brings another, physical, dimension to this dialogue. The viewer has the opportunity to emerge within the conversation. One enters the exhibit trough an axial corridor that forms symmetrical square spaces with white-washed walls at a 45 degree angle to the hypostyle parking lot. The first group of exhibition rooms has a Greek-cross plan. Thus when entering one room, the remaining spaces are left behind. The photographs are hung at an unusual height, one that forces the viewer’s neck into a slight, though not uncomfortable, downward movement. We are pulled into the amazing colors and details of the photographs, the sequences set for us to follow Guidi’s research and discoveries. When the room sequence is complete, we have to lift our heads up again and, suddenly, the whole scenario changes. The relationship towards the axial space through which one engaged the exhibition has disappeared. Seeing the images has shifted our place; the exhibition has moved us from one place to another. It is an architectural trick: the inner corners of the Greek cross are retrieved 1.5 meters from the outer corners – one wall is smaller than its facing wall – thus, when we think back to the entire space, we are not in the position we were when we entered. Feeling the shift, and contemplating it, makes us aware of the intellectual and physical processes taking place while seeing experiencing the exhibition. Back to the central space one can repeat the experience in the following rooms, and in doing so, placeless, find the required suspended time to join Guidi’s research on Scarpa’s time and place. 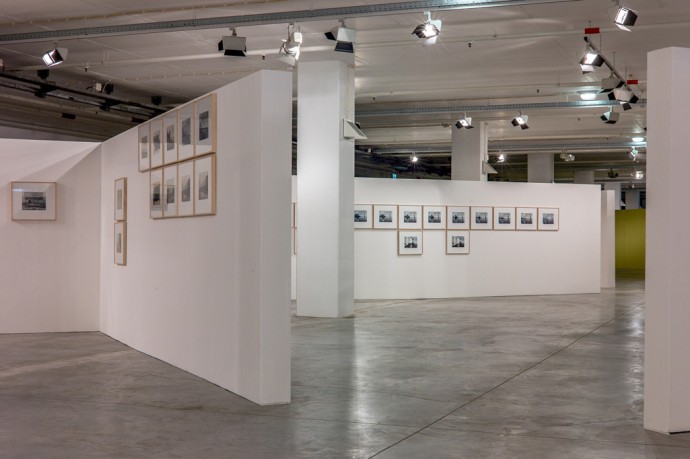 This thought-provoking exhibition is preceded by a William Blake aphorism: “The road of excess leads to the palace of wisdom.” In today’s frenzied world, overpopulated by images and speed, the quietness of this exhibition is decisive. Its tricky laconic title already offers advice: Carlo Scarpa. Brion’s Tomb. Guido Guidi. Once emerged in the exhibition’s rich conversation, where apparently everything is slower, one has, rather, to think faster: time runs faster, images run faster, ideas run faster, the world runs faster, even faster than the sun. No themes or boundaries allowed, just architectural obsessions.

/// All images by Paulo Catrica.