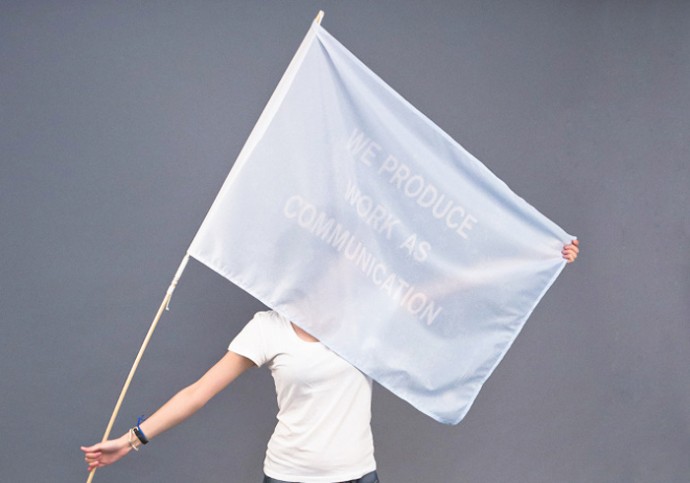 When talking about economy and politics, It is a fact that we’re living very controversial times worldwide. In Europe we have been facing what can be consider as a ‘political earthquake’ in the past months. In Spain, reactions to the endless discourse of austerity, have been the catalyst for the one of the biggest changes in the political field since democracy was instituted in the seventies. Several coalitions and platforms that were born after the 15M movement have now the possibility to work from inside the system and negotiate with the traditional political parties; as in the case of Madrid with the new mayor Manuela Carmena from Ahora Madrid , a 71-year-old former judge and human rights activist; or in Barcelona, where Ada Colau, one of the initiators of the Plataforma de Afectados por la Hipoteca, known as La PAH (the Mortgage Victim’s Platform), after several years working restless in La PAH has been elected as the mayor of the city with her platform Barcelona En Comú.

But especially this past days, international attention is focused on Greece. The country has been in a long standoff with its European creditors on the terms of a multibillion-dollar bailout, and after several and long attempts to reach an agreement with the Eurogroup, Prime Minister Alexis Tsipras announced a referendum on July 5th, to decide if Greek citizens want to accept the austerity measures proposed by the troika—the European commission, the European Central Bank and the IMF—which are based on more austerity measures in a country that is facing a high level of unemployment and where the debt is increasing almost in a daily basis. 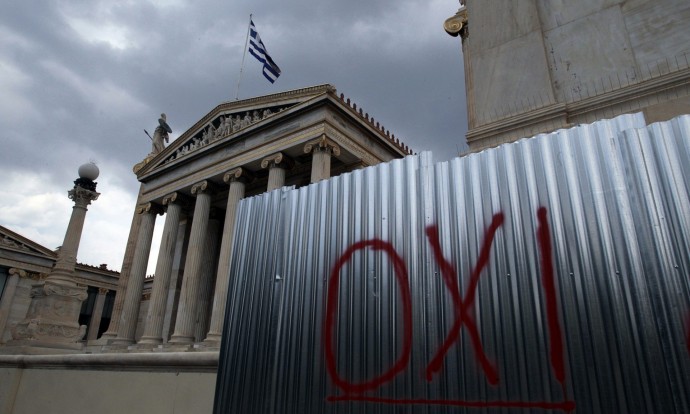 The word OXI (No) is written on a wall in front of the Greek Academy in Athens, Greece. Photograph: Simela Pantzartzi/EPA

On this scenario where the word ‘debt’ resonates loud and clear, in a context where the metric to measure the health of a country is based in pure economic outputs; it’s more important than ever to recall projects that are based in other kind of economies, where the exchange of goods goes beyond currency and attempt to search for other possible metrics. As the Invisible Committee stated, ‘perhaps we don’t need an alternative economy, but an alternative to economy.’

The Decentralized European Bank of Trust (DEB/T) is one of those project. With DEB/T, Lodovica Guarnieri, Penny Webb and Zeno Franchini propose a speculative digital and material platform which explores a possible institutional response in the age of precarious working conditions and the rise of user-generated and digital economical systems in the context of Europe.

What follows is her description of the project:

Meant as a counter response to the ECB, this near-future scenario proposes a community as a bank, where the common wealth develops and depends on the users and their interactions. Relying on block-chain principle and specific designed prompt-tools, the DEB/T is both the place and the tool which objectifies the value of voluntary work exchanges. Users are enabled to mine and transform their action of barter of resources and emotions and their outcome, into a common profit represented by the Barter and Trust coins. The currency has both a crypto and material/relational reference, allowing citizens to conduct their activities while weaving their work to the creation of a community, both local and transnational, and to have a direct and democratic participation in cultural and local change. 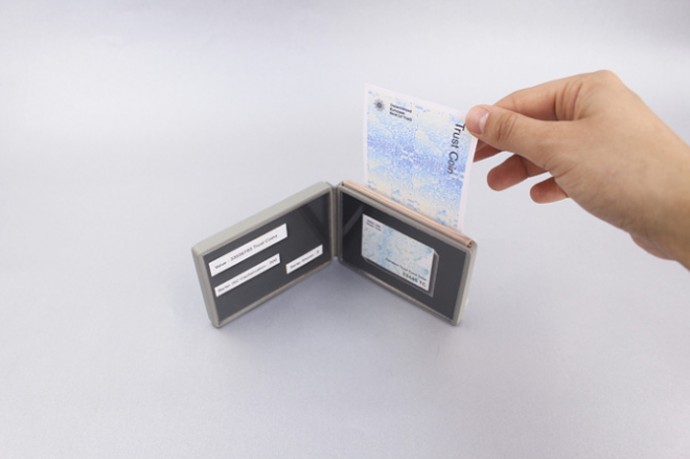 Digital wallet. It permits the accumulation of the Trust pension Fund and the overview of the personal activities. It works as a printer of the Trust and Barter Coins 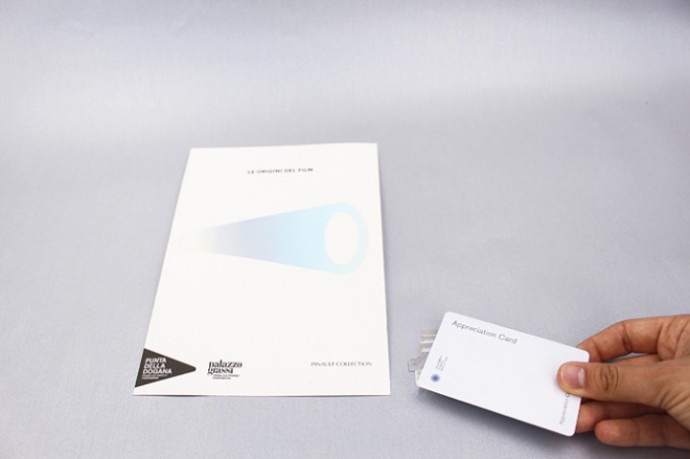 Feedback device: the appreciation card works via RFI reader, as a credit card for emotional connection with a project.

The interdependence of work is the necessary condition for the achievement of self-fulfillment which is therefore related to and represented by the creation of distributed communities based on trust. In adopting already existing systems of profit which use the interactions between users as a productive mechanism, as for example the like economy, the bank makes a detournment in their structure, sharing the profit of work among its citizens, instead of directing it towards centralized networks and institutions. 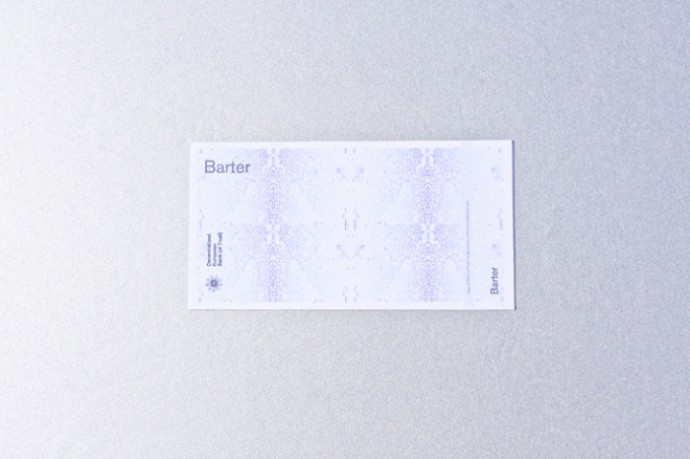 After reading the description of the DEB/T project, it’s important to realize that, in reality, crisis is a form of govern and that is inherent consequence of Capitalism modus operandi. The representation of capitalism is that one of paper money, no matter on which currency one thinks, or in which bank you’ll find it. Our values are defined by this currency: the value of our knowledge, of our time, of our work. Certainly we still think that we cannot live without money, but by imagining new possibilities we are able to start questioning the conditions imposed as immutable starting points.*

Perhaps the most important message that we can learn from this project and that we need to keep in mind, is the same as the paraphrase of Paul Éluard that we have been recalling in Adhocray Athens exhibition,

“There are other economies and other worlds and they are in this one.”

/// You can visit DEB/T at Lodovica Guarnieri web-site. The project was made in collaboration with Penny Webb and Zeno Franchini.
/// DEB/T was present in the chapter #4 of thisiswork.org publication
* This closing text is taken from The Echoes of Nothing by dpr-barcelona (Ethel Baraona Pohl, César Reyes Nájera). You can read the complete text in chapter #4 of thisiswork.org publication