What does it mean to be ‘out of place’? 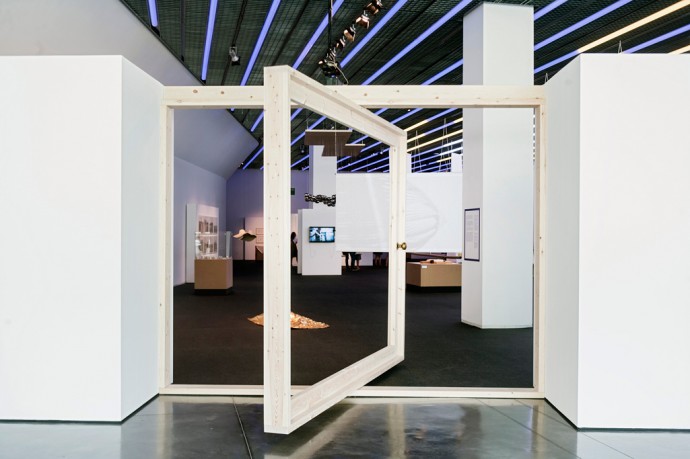 When Jacques Rancière stated that “For thinking is always firstly thinking the thinkable—a thinking that modifies what is thinkable by welcoming what was unthinkable,” he was looking for which of the granted artistic appearances —or events, in his words— required changes in the paradigms of art. Rancière referred to ‘the event’ as any kind of performance, lecture, exhibition, museum or studio visits, book or film release, as the necessary start point to build a network that will be capable to research how the artistic object can be the source of artistic emotion, and at the same time, source of novelty and more than that, of revolution. Following this main idea, curator and art critic Rosa Pera has worked on an exhibition that is looking which kind of events can drive us to discover new territories that will become the real catalysts for change in the field of design and architecture. The exhibition is entitled Out of place.

To be out of place has several interpretations, and this is the richness of the exhibition, that has succeed in becoming that kind of network mentioned by Rancière which is seeking for a new understanding not only of the state of the art in design and architecture, but a new understanding of the world we live in. Dealing with many uncomfortable topics, the visitor can explore how design responds and interacts with the contemporary notions of economy, politics, food, desire, and some other human obsessions that are often missing in museums or galleries.

The idea of using a door that is at the same time the entrance, the exit, the full, and the empty [created by Belgium artist Koenraad Dedobbeleer], can be understood as the manifesto of the exhibition itself: to be out of place is to lose contact of the usual place to occupy an unknown one. 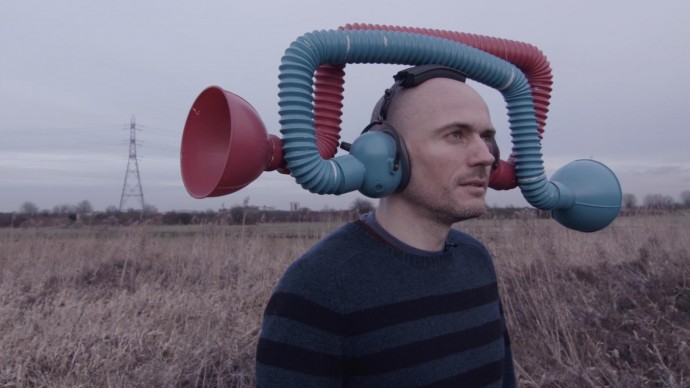 Liam Saint-Pierre, The Reinvention of Normal, 2015. 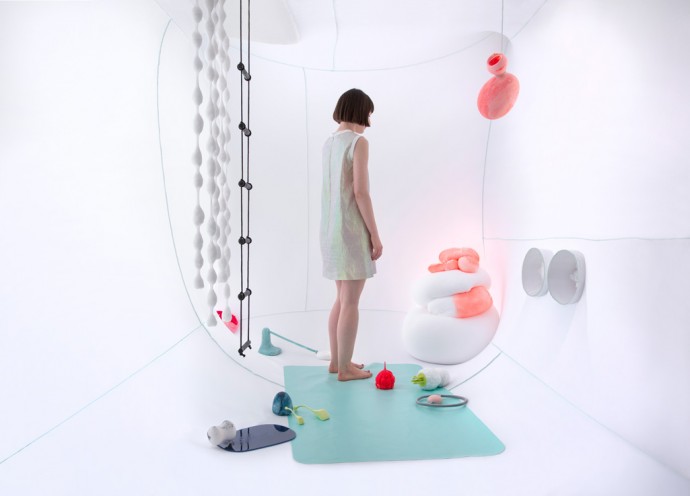 The need to discover that unknown field that can be a fertile ground to unlearn from all preconceptions, rules and habits, is in the basis of many of the exhibited projects. The Liberator, Defense Distributed’s 3D Printed Gun, pushes to the limits the current notions of ethics, economy and politics; but at the end is a project that clearly represents the contradiction between legality and legitimacy: The release of the 3D printed files in May 2013 was followed by several US governmental censures and investigations, a fact that makes you think why if in some countries you have the right to buy a gun, you’re not free to make it by yourself? Ethics vis-à-vis with economics.

In a similar position we can recall Home, a collaborative film by San Francisco-based Holly Herndon and graphic designers Metahaven.

“I can feel you in my room
why was I assigned to you?
I feel like I’m home on my own
and it feels like you see me.”

With this provocative words, the tandem has done what Herndon calls her “definitive NSA break up anthem,” in a video where she is singing while dozens of computer icons scroll past her. This is a way to research and perform how the NSA revelations have fundamentally changed the relationship between a person and her computer. It’s again a dilema and dichotomy between two opposites, the public and the private.

We had the opportunity of briefly exchange some thoughts with Rosa Pera about her outlines for the exhibition:

Quaderns: You have a background as curator in the field of art, as independent curator and also as director of el Bòlit, a center of contemporary art. From this experience, which are for you the main differences of working in the field of art and working with designers an architects?

Rosa Pera: From a curatorial approach, I don’t think there is any difference; I’m interested in the different ways to investigate and to transmit questions and ideas about different issues from a contemporary point of view, whatever the field of knowledge they are coming from. As there is not only one way to practice contemporary art, depending on the medium or according to political attitudes or critical charge, there is also a rich panorama of practices in design and architecture, including strongly speculative proposals, like design fiction or object oriented ontology.

Beyond this, the research processes are different and I think it is really interesting to provoke situations in which these practices can engage in stimulating conversations. As Rebecca Solnit points out, the scientists transform the unknown into the known; as she explains, they are like fishermen capturing fish from the sea while, in contrast, artists will submerge you into the dark blue water. I think that designers are often swimming and fishing, sometimes also into the deep. 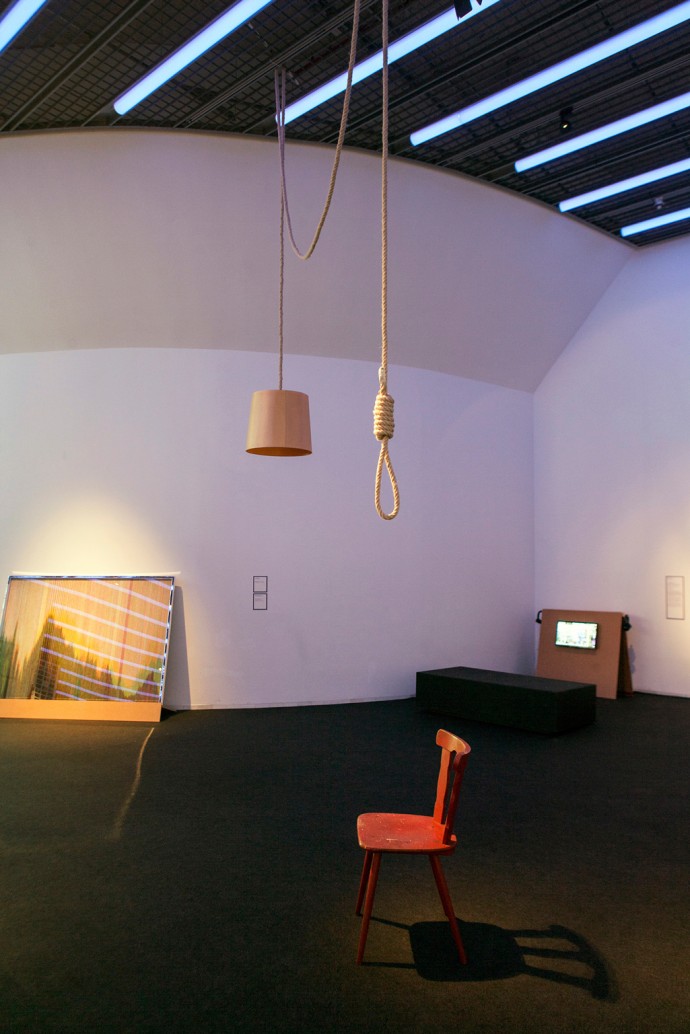 Quaderns: The main statement of the exhibition, of being ‘out of place’, refers to the need of losing contact from our comfort zone to start discovering or rediscovering other fields for actions can also be understood as losing contact with your context and reality, thus, not responding in an appropriate way to the current needs of society. Can you elaborate a bit more this statement, please?

Rosa Pera: Acting out of your comfort zone leads to other forms of investigating and communicating, maybe to open up a dialogue with contexts and audiences that usually are traditionally connected to other fields. On the other hand, more than not responding to the current needs of society, I’m referring to projects that are rooted in spaces where they are not subjected to conventional protocols, ruled by principles that resist or fight against them. Sometimes these kind of projects are proposing other ways to act, unexpected or unpredictable, following positive and constructive new prospectives and imaginaries to face the future.

Quaderns: In the exhibition, you have several pieces that are not useful in a pragmatic way, rather than that, each piece is like a manifesto on how to use design as a critical tool. Do you think that design has the same power as art (which has a long history as an activist and critical field) to communicate this critical approach?

Rosa Pera Yes, absolutely. And if they are engaged sharing ideas and contrasting different points of view, the results could be extremely stimulating. And curators and museums have a long way to walk with them, to discover new ways to approach the present and think about the future all together, making it accessible to diverse audiences.

To be out of place is the feeling that you have when discovering more than 45 projects that take you on a time travel through human history, from biogenetics, to politics, economy, fear, anger, joy, and desire. And only after taking the time travel that brings you out of place, the possibility to come back and look with renewed eyes to our daily reality, becomes authentic again. That’s the magic of this curatorial approach, that can have a real impact beyond the design field. It has a real impact in the way we understand that terra incognita that’s is our world.

/// We want to thank Rosa Pera for kindly answer our questions and for showing us the exhibition. You can follow her at @rosapera
/// The Out of Place exhibition is the result of the work undertaken by the curator team headed by Rosa Pera and a team of five professionals representing the different disciplines of the FAD: Pau de Solà Morales, Ana Domínguez Siemens, Albert Martínez López-Amor, Jesús-Ángel Prieto and Juan Vidal. With Sol Polo as Assistant Curator.
/// The exhibition will be open until October 31th, 2015 at Disseny Hub Barcelona. You can follow more info at: @fadbarcelona #foradelloc