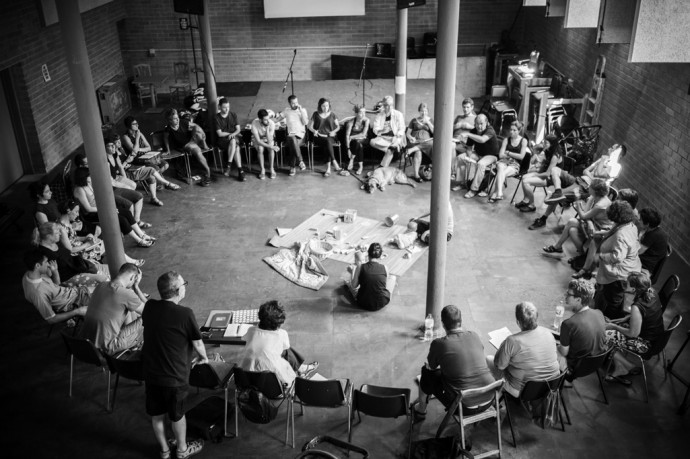 At the end of 2015 two premises are being confirmed. One, that traditional homogeneous housing policies no longer make sense and are no longer useful in a context that is entirely different in urban, social, technical, political and economic terms. And two, that this need for a change of model is made all the more acute by the great damage caused by the abandoning of the developmentalist model, starting in 2008, as a consequence of the collapse of financial models in America and Europe, and worsened by neoliberal policies of public spending cuts, especially in the south of Europe.

The result is that foreclosures and forcible evictions have left thousands of homes empty and in the hands of financial institutions, while at the same time many thousands of people are denied access to housing by the requirements of the systems of access previously in force, such as that they constitute a stable family, couple or household with an income guaranteed by a permanent employment contract.

In light of the above, housing policies need to be rethought in response to the new conditions, and not only in terms of architectural design but also in terms of programmes, of the people and agencies involved, of systems of tenancy and economic models, and of the structure of the city.

All of this means that housing policies today need to be highly diversified and complementary, pivoting on a series of priority axes:

-The incorporation of empty homes for social use on a rental basis;
-The construction of homes with new models of management, tenancy and morphology-typology;
-Small-scale interventions attuned to the logic of the renovation and rehabilitation of neighbourhoods and actively embracing the different capacities and capabilities of the future residents, not only their ability to pay rent but also their potential for generating work.

In this respect, grassroots citizen’s movements have taken the lead in coming up with workable alternatives. The first of these, in legislative terms, is acceptance of the option of handing back the keys in termination of the mortgage in order to protect people against the situation of total and permanent exclusion, in time and space, in which households unable to meet the repayments find themselves; the guarantee of rehousing; and the fight against exclusion in the form of energy poverty.

Another crucial contribution is being made by experiments with new forms of cooperative organization, which involve active grassroots participation and will result in alternative architectural typologies and construction systems, given that they must adapt from the outset to a real diversity of lifestyles and economic and technical capacities. In this new context of a self-managed cooperative economy, if these homes are not flexible and sustainable then they are not possible. Among the characteristics that are beginning to reveal themselves in the new housing resulting from cooperative and participatory processes is a focus on austerity and efficiency in the space-durability-technology-beauty correlation, in so far as housing is clearly a utility that has no need of the superfluous and the merely cosmetic, the formal qualities of which derive from its essence and its process.

Social rent, directly related to people’s actual economic capacity, is the fairest legal way to implementing the right to adequate housing, in a society which ever fewer people have a permanent work contract, a condition of stability that was the basis for access to housing prior to the collapse of the former model.

This change in policy is essential to address the critical situation created by the system of social precarity that has been imposed by neoliberalism and poses a grave threat to people’s human and social rights.

/// This text is part of the book Connection_Import Zurich. Cooperative Housing: New Ways of Inhabiting, catalogue of the exhibition with the same name, edited by Nicola Regusci, Xavier Bustos (CCP). First edition dpr-barcelona, 2015.
/// More info about the publication: dpr-barcelona
/// More info about Cities Connection Project, at their web-site.