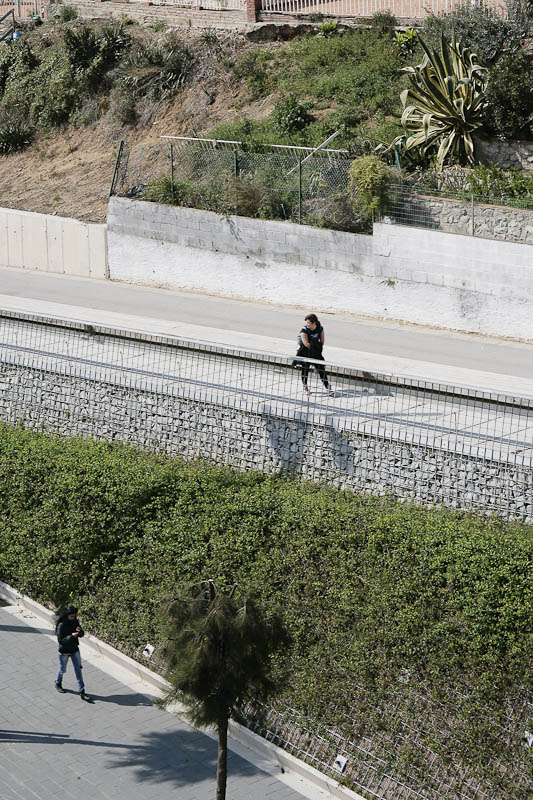 Q … We were talking about how you started…

AM I was just finishing my degree. I worked with Josep Lluis Mateo for a year, during the competition that was organized for Quaderns. After completing my final year project, I went back to his practice in 1985. Then I started working for Barcelona City Council, in Urban Projects. That was the second phase of my career. With Mateo, our reflections centred more on works of architecture, whereas the approach at Urban Projects was somewhat different.

There, we were dealing with a series of reflections and knowledge about public space. Rafael Cáceres was there too, a man with vision and a very considered approach, sometimes bordering on urban engineering. The city was seen not as a sum of things but as something more mass produced—that is, the point of departure was that the city doesn’t always have to be an invention, that a series of common elements can serve to piece together the city rather than allowing individual architects to introduce whatever they want, generating a city that is a collection of disparate elements.

Q This issue of Quaderns is refered to the year 1993. Were you working at Urban Projects during the Olympic years?

We built non-Olympic Barcelona. At Urban Projects, we were involved in other works, such as the remodelling of Meridiana and Carrer de Ferran. In these projects rather than inventing a world out of nothing, which is a frequent temptation, the idea was to piece together public space using common elements.

Q After your time at Urban Projects, you worked for the Àrea Metropolitana de Barcelona…

Yes, I worked at Urban Projects from 1988 to 2004. Then there was an opening at AMB. The concept of city was a similar one, but at a metropolitan scale with its corresponding viewpoint, involving not just major works and urban interventions but also the smaller scale. Ultimately, it is also these small spaces that go to make up the city.

Q It doesn’t add much…

No. I think that a good building is capable of generating similar operations by means of positive influence. Coderch’s building in La Barceloneta is judiciously inserted and well designed; the one next to it strives to do the same and create city fabric, but some other buildings are quite the opposite, they serve only to disfigure.

Q What about the case of Montgat?

Then, gradually, realized that the road was not just that strip but also a series of spaces around it, the project grew and the result became more interesting. Our first step was to carry out a study of the trunk road in the urban area of Montgat, which is a singular municipality. On the one hand, you have the sea, on the other, infrastructures. It is run through by the railway line, the motorway and the national trunk road. It is also very bitty; one part is a continuation of Badalona, the other stretches away towards the hillside, on the other side of the motorway. The idea was to make the trunk road permeable again, turning it into an artery that brings together all of these points. Regarding the construction of the project, mostly in the stops and vantage point areas, there is a significant focus on materials. Concrete as a flexural element has the opposite formalization to the walls, which work by means of gravity, following the slope of the terrain. The project sets out to explain the way each material works.

Q Economy of resources is another issue.

That’s right. The quality materials are concentrated at singular points, in the kerbstones, in the no parking areas, in elements subject to more wear and tear, requiring greater resistance. The rest uses relatively economical, prefabricated materials—concrete panel, gabions. I have nothing against the world of engineering; a well constructed motorway is a thing of beauty. I’ve learned a lot from the well designed motorways of the 1970s, like the A2, with its guardrails, and so on.

Q To date, you’ve always worked on rehabilitation or remodelling projects, things that already exist, improving the situation of something.

There’s something beautiful in the act of construction, which is exploiting the moment. When you’re constructing a project you become aware, suddenly, of something that had gone unnoticed. For example, the curve at the highest level of the Montgat project. There was a tree there. On site, we saw that it could be incorporated into the project, as a space in the final stretch. We discovered there’s a school near the site and when people drop their children off they stay around, chatting. So we extended the slope and transformes it into a small plaza. tris only comes from capturing the moment.