Charles Waldheim: An Architecture of Atmospherics 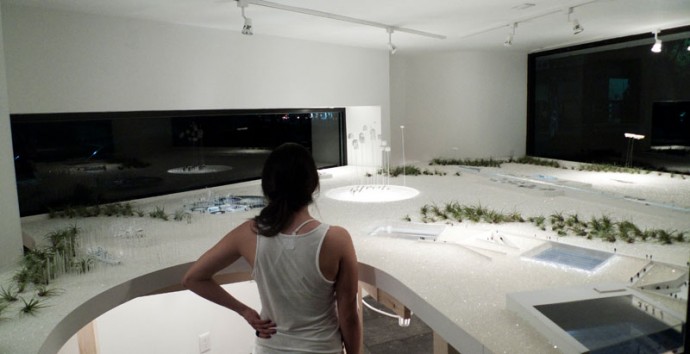 In the postmodern era architectural culture has come to emulate the culture of fashion. This culture is one predicated on a regularly scheduled production of novelty, carefully timed to the cycles of the attendant media. This culture and its cult of celebrity are now firmly established globally. As a result, the shelf-life of any particular architectural discourse has grown shorter and shorter. In part because of this relentless demand for regularly reproduced newness, actual architectural innovation is harder to come by. It occurs occasionally, in the unlikeliest of places, and of its own organic accord. This work is often difficult to recognize and harder to disseminate.

Among the dangers of the architecture-fashion industry has been its anesthetizing effects on our collective cultural sensitivity to original thought and genuine architectural innovation. When the shock of the new is felt, it is often in obscure and marginalized contexts, and often resists easy categorization. In spite of this cultural condition, and the difficulty that it poses for the dissemination of deserving work from a range of emerging talents, architecture does emerge in new and stimulating varieties. And architecture persists as a vibrant cultural form through which actual innovation is still possible. No contemporary practice represents this perennial potential for the shock of the new through architectural innovation better than the trio of young Colombian architects practicing under the collective description “Paisajes Emergentes.”

The work of Paisajes Emergentes is embodied through an astonishing array of recent projects exhibiting fluency with a range of scales and subject matter. Their provocative appropriation of the culturally loaded term ‘paisajes’ to describe their practice signals their ambivalence regarding traditional professional role of the architect. It also points toward their literacy with international architectural culture and the recent recovery of landscape as a medium of design. Combined with the adjectival modifier ‘emergentes,’ their appropriation of landscape as a frame for their diverse body of work illustrates an appetite for addressing the ecological imperatives of contemporary design culture as well as the diverse array of international environments in which they find their work projected. As such, Paisajes Emergentes serves as an apt appellation for both the medium and message of the collective’s architectural aspirations that have as much to do with curating atmospheres as with constructing buildings.

Many of the young practice’s projects exhibit specifically horticultural or botanical strategies in the service of complex public realms. These projects typically resist easy identification with the traditional typological categories of landscape, urban design, or architecture. Rather, these projects more often conflate various aspects of these diverse disciplinary practices, in favor of a new hybrid form of work. This confluence of disciplinary commitments often reveals itself through robust representational strategies hacked from various architectural and landscape precedents. More often, it is revealed through the very subject matter and operating assumptions driving the particular design response on a given site. At its best this work simultaneously reveals aspects of a particular site and subject, while conjuring remote and fleeting environments and emotions.

The architectonic language and design sensibility of Paisajes Emergentes reveal a deep literacy with contemporary architectural culture, they are equally informed by the rising importance of environment as a category of architectural thought. In this sense the recent work of Paisajes Emergentes transcends Iberoamerican architectural precedents from late 90’s and early 00’s by pushing the limits of the architectural object to its extreme end conditions, into environments, experiences, or even atmospheres. Many of the projects of Paisajes Emergentes accomplish this through a close reading of the particular ecological or phenomenal contexts in which they are sited. While these effects can reveal themselves through architectural artifice, they are best described through that dated term landscape. While much of Iberian architectural culture (and its international diaspora) has been actively engaged in resisting the rise of landscape as a professional and cultural practice in recent years, Paisajes Emergentes have firmly declared their commitments to the messy and productive potentials of landscape in relation to architectural production. In so doing, they have not only offered us an example of genuine innovation and a whiff of the new, they have also made a generational and geographic stake in the ongoing cultural struggle to open architecture to its multiform and various ecological and urban associations.

Many of the projects of Paisajes Emergentes depend upon deep horticultural and botanical knowledge. Yet it would be a misreading of their work to take these projects for traditional landscape architecture with a focus on plant material as a medium of design. Rather these projects often illustrate an ambidextrous quality, equally fluent with landform and ecological process on the one hand as with architectonic language and spatial composition on the other. What these various methodological approaches often share is an interest in the specific media of atmosphere itself, water and air. In a diverse range of projects including the Jardin Botanico and their recently completed Piscinas complex both in Medellin, Colombia, Paisajes Emergentes build complex public realms through an obsession with the material and phenomenal properties of water. In this project the hydraulic logics, and experiential potential of liquid water as well as their ephemeral effects on light and air offer the primary operating systems of a complex refined public realm. Further afield, their recent competition entries for the Parque del Lago in Quito, Ecuador and the Venice Lagoon reveal an ongoing commitment to the various potentials of a hydrological urbanism. In Quito their proposal juxtaposes the reflectivity and endlessness of pools stretching to the horizon of an abandoned airfield with the reflective metallic surfaces of the airplanes that once occupied them. In contrast with the bright light, and clear blue of Quito, their Venice Lagoon project plumbs the murky impenetrable depths of a dark, dank, Venice. In both examples, the particular phenomenal and experiential qualities of the site are revealed through the most fundamental of elements, water. Equally these projects explore the associated experiential conditions of fecund humidity of luminous aridity, while constructing complex public venues through the ambient and atmospheric conditions attendant to water in its various states.

An equally significant line of investigation pursued by Paisajes Emergentes might be described by the term atmospherics. In pushing their architecture to the limits of the object, beyond the question of ground, into the realm of climate and humidity, the collaborative has developed an approach to pneumatics and aerial suspension. In a range of projects including their proposals for monumental totemic structures in New York or other North American cities, for Heathrow airport’s guerrilla decommissioning through balloons, and for the commemoration of communities impacted by a Ituango hydroelectric plant in their native Colombia, Paisajes Emergentes have proposed a new age of inflatables.

Through their projects, and the pursuit of an architecture beyond weight and mass, Paisajes Emergentes propose an architecture of atmospherics. In this realm, liquid water, water vapor, and ice emerge as primary representational media for a new form of public life. In this work the fleeting experiential qualities of air and water as seen through light are orchestrated much in the way that the sequential experience of space was orchestrated by traditional typologies and subjectivities of landscape architecture. In pursuing the ends of architecture, the work of Paisajes Emergentes exhibited here simultaneously transcend the limits of the architectural object, while renewing the cultural potential of architecture as a medium of genuine innovation. While this body of work is still emerging, the energy, ambition, and optimism of these projects suggest that an architecture of atmospherics may very well be an important way forward for Paisajes Emergentes and for design culture internationally.

This text was originally published as part of the exhibition LIGA 02 Inundaciones/Floodings Paisajes Emergentes held at LIGA Espacio para arquitectura in Mexico City.

We would like to thank Charles Waldheim, Paisajes Emergentes, and LIGA/Productora for their permission to reprint the text.

One Response to “Charles Waldheim: An Architecture of Atmospherics”