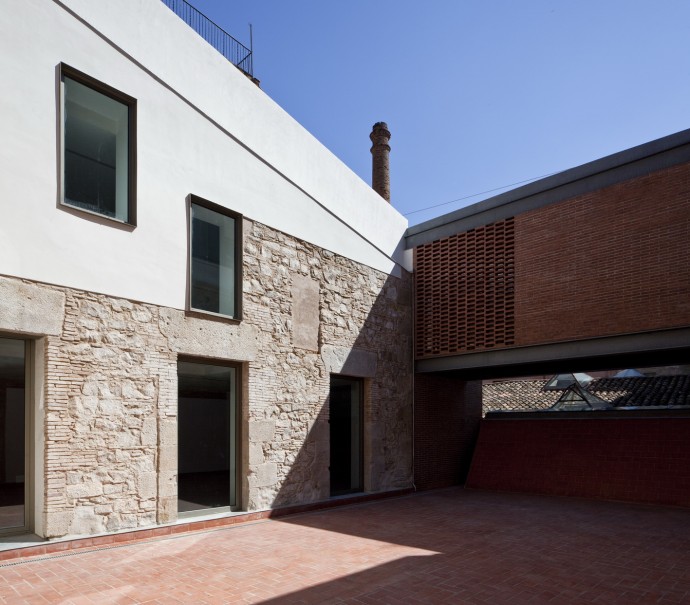 La Seca  takes the name of the Seca Reial or of the Reial Fàbrica de la Moneda (Royal Currency’s Factory) de la Corona d’Aragó. The word Seca has its origin in the “sekka” Arabic word meaning “place where it makes money.”
The old factory, which ocuped several properties between Seca Street and Flassaders, has a history of at least five centuries.They ushed currency in it between 1441 and 1849, although part of the building is the oldest , probably thirteenth century or earlier. After  its clousure in 1849 part of the buildings became a drugstore, later a fertilizers workshop and at last a disco.

The restorated buildings in 40 Flassaders Street, property of the Municipality of Barcelona, ​​correspond to a part of this ancient Seca (currency factory) in Barcelona. A part of the building is a late thirteenth century construction, but the main part is  XVII mid-century, when it was completely transformed the whole property.  Nineteenth century is also the date of an important modification of the property, and the level of floors and ceilings. And in the early twentieth century outside  yard was covered at the first floor to create a big space at ground floor. During eighteenth century was placed the great shield of the royal house of Bourbon in the main facade, which involved a modification of the original one.

The architectural intervention is based on the compatibility between historic preservation and heritage of the different constructions builts in different periods with the new cultural use of the building. The final work preserve all the contributions  from all along the history of the building to show its diversity, its complexity and all the modifications that had been in it  for different uses.

The work has preserved all the exterior and interior openings and left visible the main interventions of the different seasons of the building.

The project maintains the type of existing building and preserve the only ground floor room and the space’s distribution in hight levels around the courtyard. To reuse the building as a cultural center and the adaptation to the contemporany rules and current uses, the project proposed the construction of two new parts and a new staircase which, without spoiling in any case the formal and historic characteristics of the building, allowed a best operation in it.

By one hand, the creation of a hight space from a empty construction in the original building, which connect the three floors, permit vertical views and provides a more appropriate big scale for a public building. This same space provides an entry of daylight in the main entrance of the building and relate the ground floor with first floor’s courtyard. And the other hand, horizontally and on second floor, it has built a new wing of covered and contemporary construction, which connects the two sections, allowing the loop and defining the first floor courtyard as an outdoors spectacle’s room.

The space inside the medieval tower, where it was placed the “treasure” designed to save the currency and gold metals for the manufacture of the coins, very deteriorated with further interventions, intended to be the location of the main staircase and the center of the activity.

In the rest of interiors of spaces have been removed the divisions and conditioning them for multiple uses areas.

Leave a Reply to Joana Vila