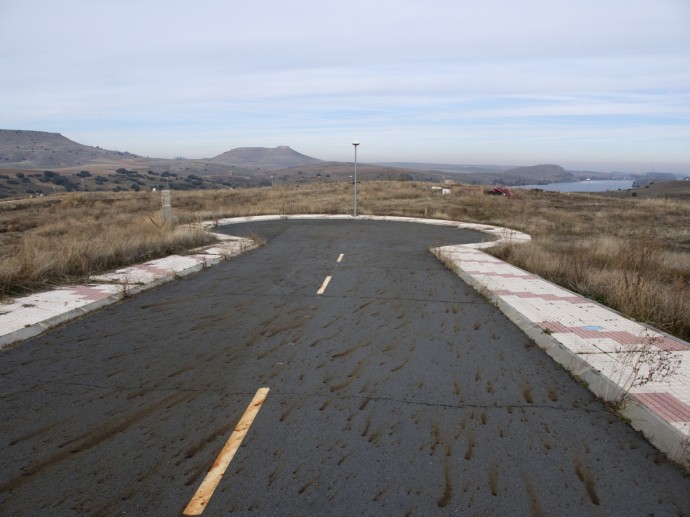 The ruin, a déjà-vu of a present future

The ruin, as concept, has undoubtedly a melancholy touch, but not of a bygone representative order; rather one of the future, of a “déjà-vu” future that is already present but that we do not yet know who to deal with. The ruin: el arte en la era de su congelación, Jorge Luis Marzo. 1991

“Modern ruins, a profitable topography” it is a photographic inventory of abandoned speculative construction in Spain. It depicts a selection of landscapes within the national territory that are occupied by uncompleted building developments. The massive implementation of leisure resorts and residential complexes in the recent decade has transformed vast costal regions of Spain and spread far into its interior provinces. The premature decay of these settlements caused by the bursting of the real estate bubble has generated images of disturbing beauty that bare witness to the incongruity between the short lived real estate sham – aborted for technical reasons – and their lasting physical after-effects.

The Spanish real estate boom and its disastrous outcome engendered the proliferation of a new type of landscape, which one could call profitscape. Peculiarities of topography, climate conditions and local circumstances have had little relevance in the genesis of these contemporary landscapes. The marketing strategy of real estate development was focused on visual consumption; its product– not unlike television– was created by extraction, reduction and mixture. The result is a type of global resort-landscape without any local contextual reference. Its prime advantage is its exceedingly “a-territorial” character which facilitates reproduction and cloning in order to be  sold anywhere and anyhow. When abandoned without being completed, these non-places gain a certain distinctive touch, part of its peculiar extravagance due to contrast between the fictitious character and built reality.

There are many kinds of ruins and their significance is manifold. A building in decay combined with prosperous vegetation rarely leaves anyone impassive. Its incompleteness is highly suggestive and can be read as a physical timeline, a tragic element, a melancholic monument or a romantic symbiosis between nature and man. The unfinished buildings that colonize the profitscapes in question are certainly a type of their own. These constructions, some barely begun, were never finished and therefore never fulfilled their purpose of shelter. Does their lack of history – nobody ever lived in it and nothing ever happened within its walls – render this type of ruin obsolete, without any chance of transformation, or can it end up acquiring some significance or value?