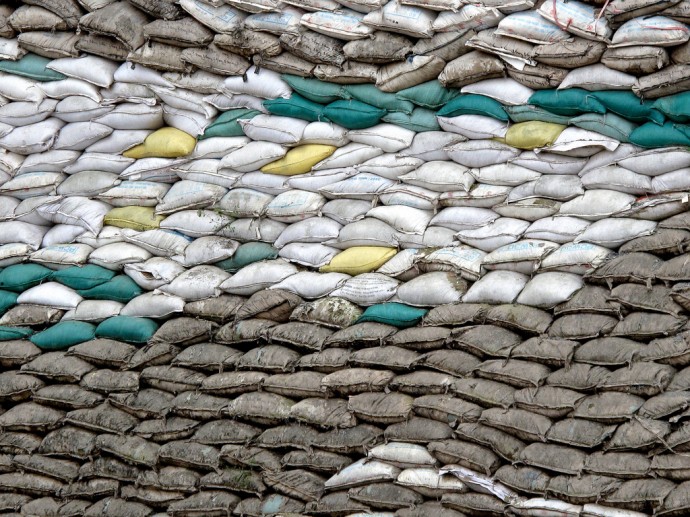 Let us suppose for a moment that the “Parainfrastructures” which Quaderns #262 concerns itself with are a class of things, that object-parodying helium balloons hovering around Heathrow Airport to block its expansion, inflatable “instant cities” powered by air compressors, “geodesic domes, parachutes, spray-foam dwellings, zomes, space frames”, “indoor built and ephemeral complexes” colonizing the open floor plans of abandoned airports, and architectural systems of “air control” can be read as a category of architectural objects called “parainfrastructures”. Even though we will be supposing in error—because “Parainfrastructures” never seeks to delineate its subject matter by so crude a means as a definition—this seems a productive error, because it permits us to see a pervasive weirdness.

This weirdness, in the context of architectural critique, is that parainfrastructures paradoxically gain their strength and appeal from having been designed with a certain disregard for aesthetics. Parainfrastructures are constructed out of the banal materials of twentieth-century industrial innovation like synthetic fabrics, geotextiles, and industrial plastics, not the refined and expensive finishes of high-corporate architecture. Structurally, they depend on ties, straps, bendable rods, and air compressors—temporary, flexible, contingent engineering.

“Against this static view, more recently infrastructures have been conceptualised as open systems. If during modernity they were designed as isolated, highly specialised systems that remained static in the face of external contingencies, they have now progressed towards being viewed as interactive systems, with a specific spatial organisation (structure) and behaviour (functioning) continually undergoing adaptation to changing surrounding circumstances.” [2]

Oddly, this points to a way that parainfrastructures are more like the heroic modern infrastructures of the twentieth century than they are different: they all gain their aesthetic power from the blunt translation of organizational qualities into material structure [3]. Just as the appeal of Roger Sauquet’s proposal for “Emergency Solutions” comes from envisioning the interiors of abandoned airports continually being restructured by the programmatic dictates of a temporary and provisional architecture of “internal versatility”, much of the aesthetic pleasure and power of hard infrastructure—like a cloverleaf ramp looping overhead, or a dam towering over river—comes from the direct link between how the infrastructure is structured and how it organizes.  Altering the aesthetics of an infrastructure without considering its organizational performance at best fails to tap into this fundamental source of sublimity, and at worst begins to divorce the infrastructure being designed from the very qualities that make it so aesthetically powerful.

Thus while the deployment of parainfrastructures and hard infrastructures responds to vastly different conditions and generates wildly divergent potentials, in both cases the architect—if she wants to harness their full aesthetic power—must learn to subordinate aesthetics.